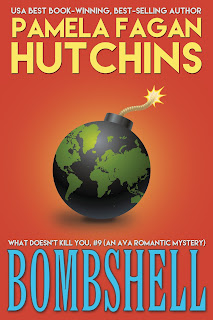 Temp worker by day, lounge singer by night, single mom Ava is having a hard time breaking up with her long-distance boyfriend and making it without the support of her parents on the island of St. Marcos. Things improve dramatically when she lands a too-good-to-be-true job at a virtual currency exchange, where she meets a seriously sexy man, and goes to work for a boss so incredible he sponsors her on a trip to New York to record a demo. But when Ava stumbles across the raped and murdered body of a young woman, she recognizes her from a shared trauma back in their school days. Ava is devastated and throws herself into avenging the girl's death. From that moment on, it’s one bombshell after another, going off closer and closer to Ava and the people she cares about most.

PRAISE FOR BOMBSHELL:
"Just when I think I couldn't love another Pamela Fagan Hutchins novel more, along comes Ava. She's smart and sassy, with a story full of juicy plot twists. I enjoyed Bombshell from cover to cover!" — Marcy McKay, author of Pennies from Burger Heaven

"To finally get a whole book of Ava's beautiful voice and attitude was so much fun. And then to see that her outer armor was mixed with the very real insecurities and struggles that we can all relate to was magical. She personifies bombshell in every sense of the word and I can't wait to have her voice in my head again in Stunner." — Tara Scheyer, Grammy-nominated musician, Long-Distance Sisters Book Club

The Story Behind the Story, Part 2: Ava

We’ve heard the names people use for sexy, gorgeous women all our lives, probably mostly without thinking about it. We’ve maybe used the words ourselves, meaning them as nothing but complimentary (or maybe not). Having worked in diversity, respect, and inclusion most of my adult life, I’m used to analyzing words: meaning, intention, history, and context. Mostly my focus has been on analysis regarding demeaning or derogatory terminology. To my chagrin, I occasionally even discover words that I’ve used have different meanings to others or within new contexts.

Take the terms bombshell, stunner, and knockout, for instance.

bomb·shell
/ˈbämˌSHel/
noun
1. an overwhelming surprise or disappointment.
"the news came as a bombshell"

stun·ner
/ˈstənər/
noun informal
a strikingly beautiful or impressive person or thing.
"the girl was a stunner"
knock·out
/ˈnäkˌout/
noun
an act of knocking someone out, especially in boxing.
"a knockout blow"
synonyms: KO, finishing blow, coup de grâce, stunning blow, kayo, TKO, technical knockout
"the match was won by a knockout"

informal
an extremely attractive or impressive person or thing.
"he must have been a knockout when he was young"
synonyms: beauty, babe, bombshell, vision, dream, hottie, dish, looker, eye-catcher, peach, heartthrob, fox, arm candy

Interestingly, I did not find the actual meaning—a bomb—in the first several definitions I looked up of bombshell. Yet that is its origin: a violently explosive round of artillery. Similarly for stunner, the definitions did not include the violent imagery of, say, a stun gun, or a blow that stuns the recipient. Only with knockout did the origin of violence appear in the common definition of today, but then again, it was the word also most blatantly linked not only to a woman’s sexuality, but to words placing a high value on her physical looks. I get a kick out of the PC example of knockout in the definition I copied and pasted above. I very rarely hear the word knockout used to describe a man, and the synonyms themselves lean toward the feminine, even though on their face they are gender neutral. Common usage just tells a different story.

Here we have three words, all meaning attractive, yet all with origins in violence, and all with ties to valuing a person, most usually a woman, for her looks, like the phrase “arm candy,” which is borderline demeaning (and is demeaning in certain contexts).

So this got me thinking. why is it that we equate attractive people, especially women, to violence? Is it the women who categorize others this way? Maybe, but I doubt they coined the terms, simply because the statistics of sexuality lean toward men finding the women attractive in this way. Women are not, generally (and, yes, there is a danger in generalizations, but it is also a way we seek to understand the world around us, so permit me here), the more violent gender.

So let me make an intuitive leap: why do men associate women with violence? With these words, it’s in an arguably complimentary way, if we conclude that the terms explain the impact of an attractive woman on men. But violence against women is perpetuated a great majority of the time by men. And I’m fascinated and repelled at the same time thinking about this push-pull: a man suggesting that a woman’s looks do violence unto him, and a man committing violence against a woman. What’s that old saw? “She asked for it?” And another: “She had it coming?” Where certain men (none like my father, brother, husband, or sons, and hopefully none like you or yours) blame women for a male’s propensity to commit violence on the female.

That’s crazy, to me. It also may not be “right,” per se, my analysis into these terms, but it doesn’t have to be. It’s the exploration of controversial ideas that excites me as a writer.

PLEASE don’t get me wrong. I have nothing against men in general at the same time as I rely on facts to tell me that males have a greater propensity for violence than females. I also have nothing against the accident of birth that is physical beauty in the eyes of some beholders. I don’t get offended if someone gives me an appropriate nonsexual compliment, especially if it’s clear they don’t see me solely as my outside package. I’m not taking exception with the use of the terms bombshell, stunner, and knockout. I’m simply exploring a relationship between words, meaning, origin, and context that I find interesting and rife with the conflict and tension I think make for great fiction.

My fascination/repulsion with the topic and terminology is at the heart of Bombshell, Stunner, and Knockout. Hence the titles, the thematic elements, and even the covers, which feature the violence, and not the sexy female the name suggests. 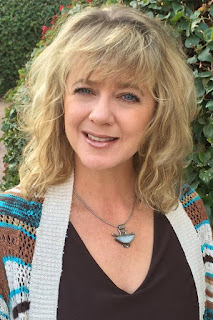 Pamela Fagan Hutchins writes overly long e-mails, award-winning and best-selling romantic mysteries, and hilarious nonfiction from deep in the heart of Nowheresville, Texas and way up in the frozen north of Snowheresville, Wyoming.

Her What Doesn’t Kill You romantic mystery series is Janet Evanovich meets Sandra Brown and a smidge of Alice Hoffman's practical magic, featuring a revolving lineup of interrelated female amateur sleuths. She is passionate about great writing and smart authorpreneurship as well as long hikes with her hunky husband and pack of rescue dogs, riding her gigantic horses, experimenting with her Keurig, and traveling in the Bookmobile. 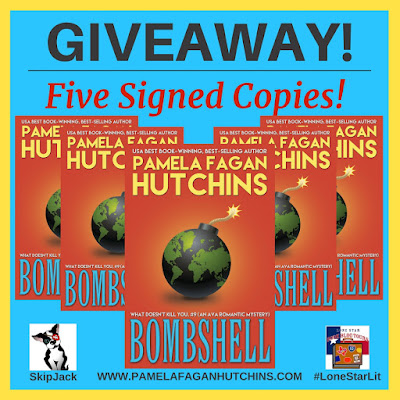