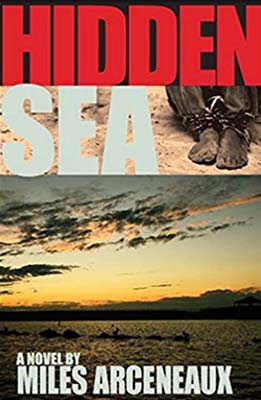 I reviewed Hidden Sea by Texas's own Miles Arceneaux for Lone Star Literary Life. This is the fifth installment in Arceneaux's (should there be an "s" there? calling all French grammarians!) Gulf Coast noir mystery series. It is a richly detailed adventure involving kidnapping, human trafficking, sea-slaves, cartels, corrupt public servants, dissolute musicians, poachers, repo-women, plutocrats, and pirates, though those last two are synonyms.

Nineteen is “sort of an itchy age, especially in a family whose motto was ‘Hold My Beer and Watch This.’” Juan Antonio Augustus “Augie” Sweetwater is nineteen, and has gone missing during a business trip to Mexico. Charlie, great uncle to Augie, quoting Gandhi, Thoreau, and John Lennon, philosophically feeling each of his sixty-eight years (“Lately he had begun to wonder if most of his dreams and adventures lay behind him, and if the whole of his life amounted to less than the sum of its parts”), heads to Veracruz to begin working his way up the coast. Raul, father of Augie, nephew of Charlie, crosses the border into Matamoros to begin working his way down the coast. Surely one of them will find Augie.

Hidden Sea is the new novel by Miles Arceneaux (aka John T. Davis, James R. Dennis, and Brent Douglass), the fifth in his (their) Gulf Coast noir series of mysteries. Special mention is deserved by the design and cover teams; the layout and covers are consistently elegant in their bold simplicity—practically a brand. Inspired by Columbus, Cortés, and the New York Times, Arceneaux tosses us into the action in the first paragraph of Hidden Sea, and the mother of all plot twists lies in wait. Many seemingly disparate flavors gel, and we nod appreciatively as the pieces snap snugly into place. Multiple third-person narration offers a compelling view of those pieces.

Unlike previous installments in the series, Hidden Sea is a contemporary tale of the Sweetwater clan, and it seems darker, somehow sadder and heavier, than the previous volumes. Arceneaux seems unhappy with our times, and the darkness feels more immediate. Hidden Sea is lightened by local color and personalities, such as Ragnar the Younger, a Viking from Oklahoma, who is “crazy as a sprayed roach” with his giant runestone. Then there’s the “villainous one-eyed pirate terrorizing the Gulf . . . a pirate who serves a Santería deity and practices human sacrifice.”

The action moves up and down the Gulf of Mexico, from scrappy little Rockport, Texas, to the grand colonial cities and tiny fishing villages of coastal Mexico, to the pine and mango forests of Cuba. It helps to have a passing familiarity with Spanish, the ecology of the Gulf, ichthyology, and boat-ology. I learned about Cuba’s annual crab migration, bait balls of plankton that light up like the Fourth of July, and the mechanics of shrimp trawlers. These details are a hallmark of Arceneaux and lend verisimilitude to the adventure.

Arceneaux is frequently, cleverly funny. The dissolute musician has a yacht named The Miss Inclined; his breakthrough record was “a tear-jerking ballad about an aging rodeo cowboy who is run over by a semi-truck full of cows en route to a packing plant.” Poetic justice?

Hidden Sea is viscerally atmospheric, like Jimmy Buffett but a little mournful, with razor edges. Is it an elegy? An ode? A lamentation? Maybe, but Arceneaux still makes you want to don your shades and a funky hat, shove your toes in the sand, and while away the afternoon with a drink accessorized by a tiny umbrella.

Which is exactly how I read Hidden Sea, on the beaches of Dahab, South Sinai, Egypt. Highly recommended, y'all.