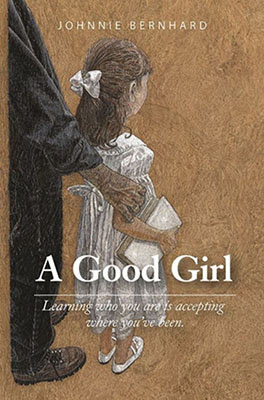 I reviewed A Good Girl (Texas Review Press) by Johnnie Bernhard for Lone Star Literary Life. This is a debut novel with a distinctive voice and rich detail.

Fifty-two-year-old Grace Reiter is returning home to South Texas, “a place she spent a lifetime running from,” as her father, Henry, “the last surviving patriarch of a chaotic gene pool,” lies in a hospital bed dying from colon cancer and a heart “shriveled from disease and disappointment.” Grace is the middle child, the dutiful peacemaker, sandwiched between her older brother, Tom, and her younger sister, Angela. Henry, the product of a legacy of alcoholism and abandonment, has been a difficult father; now that he’s dying, he wants devoted children. Grace knows she must learn to forgive Henry to save her troubled marriage, and avoid spending the remainder of her years embittered by regret and resentment.

A Good Girl is the debut novel, equal parts contemporary and historical fiction, from Johnnie Bernhard. I was instantly drawn in by Grace’s voice and Bernhard’s skillful use of small details to build a rich, dimensional portrait of a people and a place. Bernhard explores universal themes of redemption, hope, and forgiveness, as Grace progresses in her interior exploration of character and motivation.

Bernhard’s flawed characters are sympathetic, their dysfunctional family dynamics authentic. Grace sometimes provokes impatience as she indulges in self-pity, but her development is handled deftly. When the siblings meet at the house where they grew up, the scenes are fraught with the weight of secrets and misunderstandings. Irma, Henry’s girlfriend, “a love affair that began with a feud across a six-foot privacy fence,” is a hoot, a “mixture of post-WWII working woman and redneck hoarder” who doesn’t leave home without her personal ashtray.

A Good Girl moves at a swift, steady pace. Though Grace’s musings become repetitive and overly sentimental during the middle of her third-person narration, her wry humor is the antidote. Her commentary on “a culture that based its world view on cable news and elementary-level geography lessons” is spot-on.

Bernhard can turn a phrase (“I-10 West was a 500-mile umbilical cord”), and her word choices are precise (“so much of her father’s life was hearsay”), her dialogue engaging (“[Mama] was dead at sixty, Tom, because she pushed a rock up a hill every day of her life. A rock called Henry”).

A Good Girl employs frequent, lengthy flashbacks, tracing “two hundred years of a chaotic family history [that] began with an Irish girl, Patricia Walsh of County Galway, Ireland.” The family tree inserted after the title page is a nice touch and proves useful. Bernhard does a neat job of fitting the fictional family biography into the chronicle of Texas history, and she’s obviously familiar with small-town Texas. Changes between contemporary settings and historical periods are appropriately marked by shifts in tone and style, though a light copyedit would improve the work before its next printing. That Grace’s daughter is marrying an Irishman she met at college, and moving to Ireland, is an inspired touch that bring the story full circle, enabling a satisfying ending.