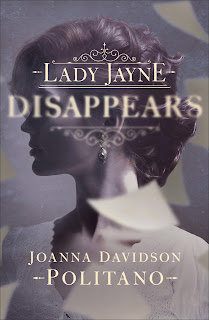 When Aurelie Harcourt’s father dies in debtor’s prison, he leaves her just two things: his wealthy family, whom she has never met, and his famous pen name, Nathaniel Droll. Her new family greets her with apathy and even resentment. Only the quiet house guest, Silas Rotherham, welcomes her company.

When Aurelie decides to complete her father’s unfinished serial novel, writing the family into the story as unflattering characters, she must keep her identity as Nathaniel Droll hidden while searching for the truth about her mother’s disappearance—and perhaps even her father’s death.

“Emotional. Intriguing. Both haunting and romantic. . . In her historical fiction debut, Joanna Davidson Politano delivers a smart plot that navigates twists and turns with a mixture of wit, intelligent characters, and a refreshingly original voice. Reminiscent of Dickens’ classic storytelling, Lady Jayne Disappears is a debut to remember!”
—Kristy Cambron, author of The Illusionist’s Apprentice

“Wonderfully unique, this compelling debut grabs you from the first intriguing line. The evocative English setting, textured characters, literary theme, and unusual romance make Lady Jayne Disappears a standout, the lovely cover offering a hint of the gem within. A must read!”
—Laura Frantz, author of A Moonbow Night

Excerpt from
Lady Jayne Disappears
By Joanna Davidson Politano
I pinched my lips to keep from spilling my delicious secret—the one that gave me more worth than anyone could guess. If only I dared say the words aloud. Pardon, sir. Have you heard of Nathaniel Droll? Well, I happen to know the real man who masquerades under that pen name. Ah, the look of shock that would splay over his arrogant face.

“Novel characters make the finest friends, so I can hardly fault your attachment.” Silas Rotherham straightened the hat that jostled on his head to the rhythm of the carriage wheels and smiled. “Flesh-and-blood people are more complicated and difficult to know.”

“I should say not. So many people are closed up, all tucked inside themselves, yet they bloom open in beautiful ways if you would only take interest in them.”

The flick of his eyebrow hinted at disapproval, driving me deeper back into my seat as my face heated. I had done it again.

I tipped my head back against the cushioned seat and allowed the carriage to carry me and my heavy thoughts toward a life where this disapproval would be normal fare. “I hope I did not offend you, sir.”

“It was merely a surprisingly deep answer to what I believed a simple question.”

“Life is deep, Mr. Rotherham.” Oh so deep. Especially when it is a series of intense moments all piling on top of you, fighting for your urgent attention every day. “Which is why books are such a lifeline. Stepping into the pages of someone else’s story means joining them in their normal life and pretending that you, for one liberating moment, will also become whole and healthy and wonderfully normal by the end.”

His eyes, lifting into a pleasant crescent shape with his smile, assessed me with the softness of grace. “You’ve managed quite well in the life you were dealt. How were you not mired in sadness every day at a place like that?”

“There are many good days that outweigh the bad. And besides, imaginations are transportable. They even follow one into poverty.”

His face dipped back into the shadows. Laughing? Or disapproving?

No matter. The stress of the week weighed me down much like the wet dress I wore. We’d only buried Papa days ago. “And might I ask who has the pleasure of escorting me?”

“I am a family friend staying at Lynhurst for the summer.” He cleared his throat. “They did not feel they could trust so delicate a matter to a servant, no matter how faithful.”

“I see.” But I did not. What was delicate about the matter of bringing one’s niece home?

Long, silent moments passed before the carriage paused for an iron gate to grind open. I leaned into the window for a glimpse of the place, but the muted glow of lamplight showed precious little. Three . . . no, four cupolas speared the dark clouds shrouding the roofline. Surely the estate couldn’t be as fanciful and amazing as Papa’s wild stories, but anything less would not have captured the imagination of such a man. Propping myself higher, I strained to see the outline of the fabled Lynhurst Manor through the muggy dark.

After endless minutes of rolling up the unlit gravel drive, the carriage veered left and halted mere feet from the great house. A large hanging light illuminated an arched stone entryway with double wooden doors not unlike the solid front entrance of the prison. Perhaps I’d feel at home here after all. The mansion’s gray exterior wall extended far outside the little circle of lantern light, into what seemed to be eternity.

It was true, then. I’d hardly believed Papa’s stories of this place, for what family could live in such wealth while their brother languished in poverty? A mere pittance of their wealth might have freed Papa years ago. Steeling myself against bitterness, I tried to summon an explanation, but could not.
Mr. Rotherham alighted. As I pushed off the seat, he held up a palm to stop me. “You’d best let me prepare them first, Miss Harcourt.”

I sank into the seat, the damp feel of my thick skirts beneath me. “Prepare them for what?”

He paused just outside the carriage, a rare smile flicking over his face. “We all rather believed you to be a collection of bags and trunks.”

“I beg your pardon?”

“The solicitor had instructed Lady Pochard to collect the belongings of the distant relative who had died in debtor’s prison. You can imagine her surprise when she finds out exactly what this relative’s belongings include.” He shook his hat and replaced it. “Wait here. I’ll return for you when I’ve broken the news to her.” 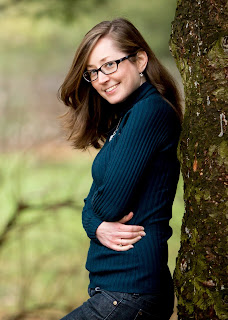 Joanna Davidson Politano freelances for a small nonfiction publisher but spends much of her time spinning tales that capture the colorful, exquisite details in ordinary lives. Her manuscript for Lady Jayne Disappears was a finalist for several contests, including the 2016 Genesis Award from ACFW, and won the OCW Cascade Award and the Maggie Award for Excellence. She is always on the hunt for random acts of kindness, people willing to share their deepest secrets with a stranger, and hidden stashes of sweets. She lives with her husband and their two babies in a house in the woods near Lake Michigan and shares stories that move her on her website. 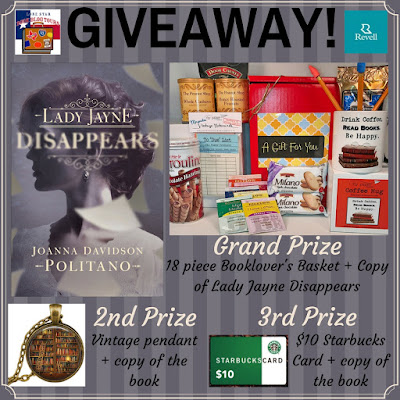