Review: THE NIGHT OF THE VIRGIN by Elliott Turner 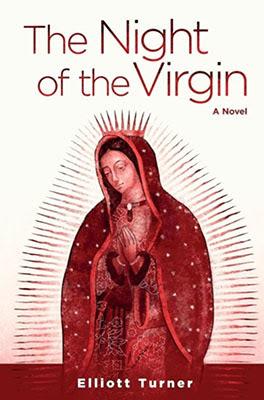 I reviewed The Night of the Virgin: A Novel (Round Ball Media) by Houston's Elliott Turner for Lone Star Literary Life. This is an uneven but thoughtful and eye-opening debut novel. Turner has promise and soccer fans will love it.

Emmanuel “Manny” Hernandez grew up in Brownsville, Texas, loving books—his mother dropped him off at the library during summers to avoid running expensive air conditioning—and soccer. Manny longs to escape South Texas but is constrained by his undocumented status—he’s a Dreamer, brought to Texas by his mother when he was a toddler. He refers to the Border Patrol checkpoint at Falfurrias as garrita (“claw”). In eighteen years, Manny hasn’t been further from Brownsville (“a prison and his sentence was ad infinitum”) than that checkpoint. But to follow his soccer dream Manny must brave the checkpoint, and so one day he does, with his sister, Maribel, and his best friend, Hector, and they make it through, all the way to San Antonio and a chance at more.

We meet Manny in a hospital emergency room after he’s broken his leg during practice with the San Francisco Gales professional soccer team. In and out of consciousness, Manny grows reflective, moving back and forth in time, from the present to the past, into the future, and back again. Turner also changes perspectives, from third person to Manny’s first person in the form of diaries dating back to childhood. The pacing is highly variable, with a disjointed narrative and abrupt shifts, and my attention wandered at times. Turner’s male characters feel authentic; they are complex and diverse in race, ethnicity, nationality, sexual orientation, and religion. His female characters aren’t as detailed; Maribel is a presence in most of the novel but in the end, we still don’t know her.

The Night of the Virgin is often funny. Manny continually reinvents himself after the end of his soccer career and obtains a teaching certificate. “[Manny] imagined Socratic dialogues and articulate debates,” Turner writes. “In reality, he had stood up to millionaire coaches and billionaire owners, but was about to get his ass kicked by a group of twenty-five high schoolers.” Turner’s deceptively simple prose is often sly, and he is skilled at dialogue, especially a technique where only one side of the conversation is heard. Unfortunately, there’s not enough dialogue—he tells more than he shows. Turner appreciates language, especially the geographical variations of Spanish. “The Rio Bravo has long separated the US from Mexico and English from Spanish,” he writes. “Yet those inhabiting the border often speak both languages and have twisted the two tongues.”

Texas, particularly the borderland and Rio Grande Valley, come alive in The Night of the Virgin. “In the RGV, as in ancient Rome, time and people moved slower.” Before Manny moves up to the pros he plays for a minor-league soccer team in San Antonio, his “weekends filled with road trips to Odessa and other small Texas towns forlorn by civilization, but full of humidity and dust.”

The Night of the Virgin is a bumpy beginning, but Turner has promise. Soccer fans will appreciate this novel, and I wait with interest to see what Turner does next.