Review: THE NEON PALM OF MADAME MELANCON by Will Clarke 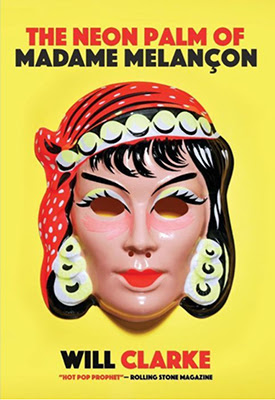 I reviewed The Neon Palm of Madame Melançon by Dallas's Will Clarke for Lone Star Literary Life! This is a riotous, rollicking ride with a message.

“There are no coincidences, only the chess moves of an unseen hand.”
—Madame Melançon

Duke Melançon left New Orleans for Houston (“a world that wasn’t ruled by tarot cards and Aleister Crowley’s incantations”) as soon as he could, embarrassed by his family, especially his mother, the titular Madame Melançon, queen of “Nawlins” fortune-tellers, adviser to politicians and the mob, among others. Duke is a corporate attorney for Mandala Worldwide, an oil company whose Sub-Ocean Brightside well has just exploded in the Gulf of Mexico, killing dozens of workers and spilling millions of barrels of crude into the waters off Louisiana. Duke returns to New Orleans to rescue Mandala’s reputation and revenue, but when he gets there he must also deal with another urgent catastrophe: Madame Melançon has chased a calico cat (“basically text messages sent from the devil”) out of her kitchen with a broom, running down the street after the bad omen, and disappeared without a trace.

The Neon Palm of Madame Melançon is the new novel from Dallas’s Will Clarke, whom Rolling Stone has dubbed a “hot pop prophet.” This book is published by Middle Finger Press (“hand-crafted fiction written for titans of industry, Bilderbergs, and oligarchs”), a Dunning-Kruger Company. In psychology, the Dunning-Kruger effect is “a cognitive bias wherein persons of low ability suffer from illusory superiority, mistakenly assessing their cognitive ability as greater than it is.” Seriously, to get the full sublime effect go to www.middlefinger.press.

Duke’s first-person narration is fast-paced and wholly entertaining. The seventh son of a seventh son, he is a cynical nonbeliever in his mother’s powers. As clues are uncovered in a sort of demented scavenger hunt, and a preponderance of the evidence shows that it may be Duke’s fated responsibility to save the world from the soulless future of the Great Unseen Hand, a crisis of conscience forces him to reconsider his career, his choice of employer, his feelings about his family, and whether he can count himself a good person.

Clarke reminds me of Thomas Pynchon. His colorful characters include a Kurt Vonnegut impersonator (or is he?); a Loup Garou (or is he?); Duke’s uncle, a pot-smoking priest called “Uncle Father”; and Duke’s sister LaLa, who dresses as successful celebrities (Pink, Annie Lennox), hoping to trick the fates into bestowing the luck of the rich and famous upon her. Clarke is equally skilled at sweet family scenes with Duke and his wife and little boys, and slapstick scenes involving a plague of raccoons. Dialogue is smart and engaging, with a Cajun accent.

There are footnotes, doodles, and chapter titles such as “Turn to Page 5 of Dracula!” and “Cab Smells Like SpaghettiOs and Febreze.” Clarke is having a very good time, but he’s also very serious about climate change and the environmental future of the only home we have. In the words of maybe-Vonnegut: “Wake up, you moron! The planet is dying as we speak. Whatever made you think that money was worth this? You can’t breathe it you know!”

The Neon Palm of Madame Melançon is a smart, ultimately hopeful mystery of science and magical realism, a loving evocation of “all this broken beauty” of New Orleans, and a riotous, rollicking ride with a message. One person’s witch is another person’s scientist. And vice versa.