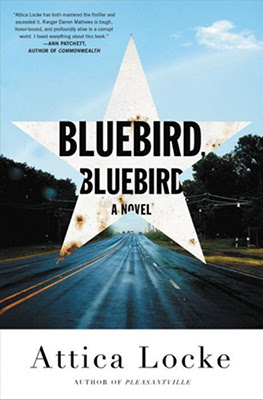 I reviewed Bluebird, Bluebird: A Novel (Mulholland Books) by Texas's very own Attica Locke for Lone Star Literary Life. This is an atmospheric, powerful, nuanced parable about race and class disguised as a murder mystery.

The tiny town of Lark, deep into East Texas on Highway 59, has had two murders in the last week. That’s two more than the last six years. The first body is that of a black man from Chicago, a stranger in town. The second is a white woman, a local, whose body turns up in the bayou behind Geneva Sweet’s Sweets. Geneva Sweet has spent her entire sixty-nine years in Lark, the last several decades running her small diner. Geneva keeps her secrets and minds her own business, but other people are terrified of those secrets and minding her business, too.

Darren Matthews is descended from a line of lawyers and lawmen, most recently working a task force focused on the Aryan Brotherhood of Texas, and one of the few black Texas Rangers. He’s got wife troubles, career troubles, bourbon troubles, and legal troubles; now he’s got Lark troubles. Assigned to investigate the murders in Lark, Darren finds himself stymied by his superiors who maybe don’t want to know what happened in those East Texas woods.

Bluebird, Bluebird: A Novel is the latest thriller, the first in a new series, from best-selling, prize-winning author Attica Locke, who is also a writer and producer of the television drama Empire and a native of East Texas. Bluebird, Bluebird is a timely, modern parable that tackles head-on entrenched arguments regarding the relationship between the law and African-American citizens. Is the law going to save them by protecting them, or do they need protection from the law?

Locke gets our attention with the first line: “Geneva Sweet ran an orange extension cord past Mayva Greenwood,” she writes, “Beloved Wife and Mother, May She Rest with Her Heavenly Father.” And she excels at vivid, just-right similes. These cemetery headstones are “spaced at haphazard and odd angles, like the teeth of a pauper.” Then she conjures the piney woods: the bayous “brown as an old penny,” clouds “laced rust-red, East Texas dirt reflected in the sky,” cypress and Spanish oak, and the dark nights “thick enough to touch.”

The third-person narration, told from Darren’s and Geneva’s points of view, is fast paced and twisty. The tension and menace are visceral. These characters and their struggles feel authentic with their divided loyalties and torn sympathies, their simultaneous love for and shame of their home. Ranger Matthews “wanted to believe that theirs was the last generation to have to live” by the “ancient rules of southern living,” the last generation in which a black man’s demeanor could get him killed. Matthews had hoped “change might trickle down from the White House.” Except, as we have so recently witnessed, “the opposite had proved to be true.”

In the end, to protect and serve, Darren must decide who he is and declare, “I’m Texas, too. They don’t get to decide what this place is.” Bluebird, Bluebird, which takes its title from a John Lee Hooker blues, is a nuanced excavation, and a powerful indictment, of our treatment of race and class disguised as an entertaining and engrossing suspense novel.