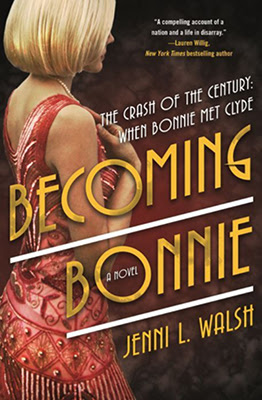 “But I, being poor, have only my dreams.”

“Saint” Bonnelyn Parker grew up poor and ambitious in Cement City, a company town in West Dallas created for the employees of the area’s cement plants, in the early twentieth century. In 1927, Bonnelyn is seventeen years old, attending high school, singing in the church choir, escaping into books at the local library, and dreaming of becoming a teacher. When her widowed mother becomes ill, her brother is hurt on the job, and Bonnelyn is laid off from her waitressing job, she follows her best friend, Blanche, to a bartending job in an illegal speakeasy (its walls papered with pro-Prohibition posters) in the basement of a physician’s office in what is now the Deep Ellum neighborhood of Dallas, so she can keep the electricity on.

The pace is steady if slow at times. The plot is simple but packs a healthy number of twists. Walsh’s characters are engaging, especially Bonnelyn’s best friend, the irrepressible Blanche. Bonnelyn seems to break character regularly, but these instances always follow a threat to the financial survival of her family, providing plausible motivation. “I mixed right and wrong together ’til I found a comfy spot in the middle,” Bonnelyn says. Walsh’s historical details are authentic, often charming, and well deployed. Her research of the era and setting is obvious, while she grants having taken liberal license with her historical characters, beginning with Bonnie Parker’s name.

Bonnelyn’s first-person narrative is written colloquially (“Mama had more pride than a lion”): droppin’ its G’s; using “ya” for “you”; “’cross” for “across”. This technique is effective but used inconsistently: an equal number of G’s remain, and some word choices appear too sophisticated for the established down-home, country style—the same Bonnelyn who says “not no one” refers to customers at a café as “patrons”. Overuse of various conjugations of “growl”, and the like, indicate a need for closer editing. These elements taken together can be distracting.

While uneven, Becoming Bonnie is creative and has moments of inspiration; Walsh has promise. Y’all look for the sequel, Being Bonnie, coming soon.