Review: BEFORE THE RAIN FALLS by Camille Di Maio 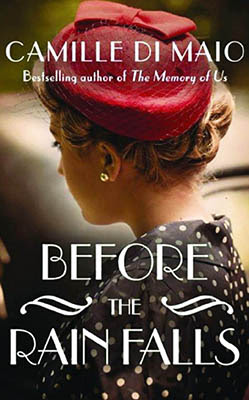 I reviewed Before the Rain Falls (Amazon Publishing) by Camille Di Maio for Lone Star Literary Life. This historical mystery is uneven, but Di Maio has potential.

In 1943 in the Hidalgo County courthouse, Della Lee Trujillo is found guilty of the murder of her sister, Eula Lee, and sentenced to life in prison. Seventy years later, ninety-year-old Della returns to the fictional Texas border town of Puerto Pesar on parole. Della is ready for the Truth Days, ready to tell tales about the Before Days and the After Days; she just needs the right ear to hear them. Enter Mick Anders, a cynical reporter from Boston who has one last chance to save his career.

Before the Rain Falls: A Novel by San Antonio’s Camille Di Maio is a historical mystery, moving back and forth in time from the dark days of the Lee family’s past to the present-day troubles of Puerto Pesar. A record-breaking drought and poverty plague the town. As happens in trying times, desperate people turn to religion and the supernatural for solace and hope. Puerto Pesar is no exception as the populace decides that a childhood portrait of Eula Lee has begun crying, earning her the honorific “Santa Bonita.” Di Maio has a point to make about the diminished role of faith today:

[Della] nodded. “You young people don’t pay too much heed to those kinds of things today, but you have to remember that I grew up in a time with stark right and wrong. Heaven and hell stuff. Sin. You don’t use that word, do you, Mr. Anders?”

He couldn’t say that he did …

“Exactly,” she continued … “[My father] prayed for [my mother] all the time. Not that she would come back and love him, but that she would renounce her adultery and honor her vows so that she could be restored to salvation.”

She was right. He didn’t know anyone who used language like that. It was something from another century.

There is more than one mystery in Before the Rain Falls, and more than a few plot twists. Di Maio sets the hook in the preface, earning our attention. However, the pace lags and action is sparse. She nails the small, border-town vibe. Di Maio’s writing ranges from charming to heartbreaking, and the developing romance between Mick and Paloma is sweet, the flirty dialogue cute and fun:

“Is this the Mick Anders who trudged into town a couple of weeks ago with a chip on his shoulder and tassels on his shoes?” [Paloma] leaned over and pointed to the raffia flip-flops he was wearing.

“That Mick Anders? I don’t know the man.”

“Oh, you should have seen him. Good-looking guy. But arrogant. Really arrogant. Went on and on about some weird food in Asia.”

“Sounds like an ass. Glad I didn’t run into him.”

Di Maio’s characters are sympathetic. In addition to Della Lee and Mick Anders, there’s Paloma Vega, a doctor who left a sister and grandmother in Puerto Pesar to follow her dreams, and Mercedes Vega, Paloma’s teenage sister, resentful of Paloma’s abandonment and restless for her own chance to escape—another tale of two sisters.

In the end, the pieces fit together a little too nicely. Before the Rain Falls is uneven, but evidences Di Maio’s potential.