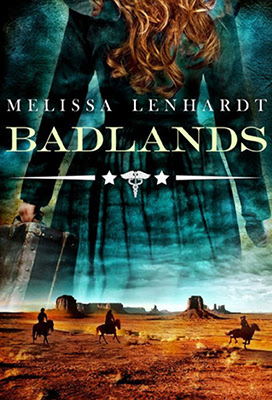 I reviewed Badlands (Redhook) by Frisco's Melissa Lenhardt for Lone Star Literary Life. Badlands is the final installment in Lenhardt's genre-busting feminist-thriller-Western series that began with 2016's Sawbones. It is every bit as tough and raw as the American Wild West and proves more authentic as it denies the genre its myths and tropes, unsparingly exposing the options of women of the era with an unflinching eye.

SPOILER ALERT: Badlands is the third book in a trilogy. Proceed at your own risk.

Laura Kindle (previously Laura Elliston, originally Dr. Catherine Bennett) is on the run again from the law, Pinkertons, and bounty hunters, after the arrest of her husband, William Kindle. She and St. Louis madam Rosemond Barclay, who claims to be helping Laura at William’s behest, wash up practically penniless in the quintessential Western boomtown of Cheyenne, Wyoming Territory. Rosemond is determined to go legit, joining proper society and leaving her past behind; Laura waits to hear news of William’s court martial, creating yet another identity in another new place. But the past catches up to both women, and Laura knows she must finally confront the New York murder charge against her or forever be a dependent pawn in other people’s games.

Badlands is the final installment in Melissa Lenhardt’s historical thriller trilogy, the first of which, Sawbones (2016), I hailed as “a thoroughly original, smart and satisfying hybrid, perhaps a new subgenre: the feminist Western.” Badlands, worthy of the established characters and ethos, does not disappoint.

Laura’s first-person narrative begins with Lenhardt’s characteristic bang. Apart from the middle third when the pace flags along with Laura’s resolve, reflecting her exhaustion and despair, the action is fast, the plot twists frequent. Though Lenhardt does a good job of integrating necessary facts from the two previous books, Badlands does not stand alone; to get the full effect you should begin at the beginning. A novels-within-the-novels device is a welcome, humorous touch of tongue-in-cheek. As always, a shout-out is due for the cover art and design of this trilogy. All three novels are gorgeous.

Lenhardt’s characters are diverse and complex. Her women and their friendships get the attention they have always deserved but so rarely receive. Prodigious research is evident in the language, settings, and situations. An unsettling many of the era’s convictions regarding social justice and gender roles remain (bizarrely) controversial today. Lenhardt also breaks out vivid similes: “Between hands I would catch sight of Salter sitting across the room at a poker table, the prostitute draped over his shoulder like a poncho.” Like a poncho.

Badlands is every bit as tough and raw as the American Wild West (which smells of “body odor, blood, horse sweat, manure, and new lumber”) and proves more authentic as it denies the genre its myths and tropes, unsparingly exposing the options of women of the era with an unflinching eye. Badlands is not for the faint of heart; Lenhardt seems to be trying to shock us, but it doesn’t feel egregious—it feels like bold truth-telling.