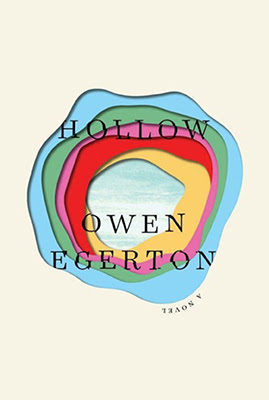 Oliver Bonds has come undone, losing everything after his arrest in the matter of the death of his toddler son, Miles. His wife has divorced him; he lives in a shack (currently padlocked from the outside) behind Jenny’s Beauty Salon in south Austin; the university (hasn’t officially, but has) suspended him from his position as a History of Religion professor; formerly a volunteer at the Agape soup kitchen, now he goes to eat breakfast, pick up a bus pass, and check his email—he gets missives from God; he no longer believes in the fairness and goodwill of the universe, which unmoors him. Oliver is vulnerable when he meets Lyle, conspiracy theorist, devotee of crackpot science, and member of the Hollow Earth Society of Central Texas. “The concept of the Hollow Earth was something better than factual; it was applicable. I was myself a hollow shell,” Oliver explains, “with nothing but a question at my core.”

Hollow: A Novel is the latest from Austin novelist and screenwriter Owen Egerton. Hollow grabs you, startlingly, with the poetry of its first sentence (“The moment [Miles was] born, the room smelled of warm soil and blood”), and follows up with sardonic wit (“This has remained the key to our friendship. [Lyle] is full of opinions and I don’t value his opinions”) and an existential quest (“I was blank and newly uncertain of the nature of everything”). Hollow is off-beat, poignant, ultimately beguiling literary fiction.

Oliver’s first-person account of his devolution is complex and disturbing, regularly administering a shot to the gut. Guilt and grief have rendered him unstable, living a “life unsustainable.” The pace is smooth, minimally interrupted by flashbacks. There’s little high-impact action in Hollow, but where it occurs it is swift and unexpected.

Egerton’s descriptions are frequently crisp: Oliver worried that his paycheck “stretched over our expenses like a queen sheet on a king-sized bed”; Sixth Street in daylight is “gaudy as a Christmas tree come January.” Sometimes they’re lyrical: the landlord’s Irish accent is “barely bruised by twenty years in Texas”; when a woman frowns, “one thin line stretched across her young forehead like a fault line, narrow and unalarming, but promising some distant future quake.” Occasionally they’re beautiful: When his wife was in labor in the shower, “She rested her arms on my shoulders and we swayed, like teenagers slow dancing.”

Hollow uses the Everyman to address grand concepts and big questions, exploring happiness, privilege, suffering, and the utopian chimera. Egerton challenges the just-world hypothesis, which holds that life is fair: good things happen for good people; bad people are punished. He uses an academic discussion between Oliver and a student to explore the biblical tale of Job. Characters at the soup kitchen and a friend in hospice care offer further opportunities to confront the question: What is your sin? Oliver needs to know what he’s done to deserve his fate.

Charmingly designed, quoting portions of text and reproducing whimsical maps from nineteenth-century adventure novels, Hollow ends elegantly, even hopefully, with a touch of Thelma and Louise. The biggest question of Hollow is: Does Oliver want to live?