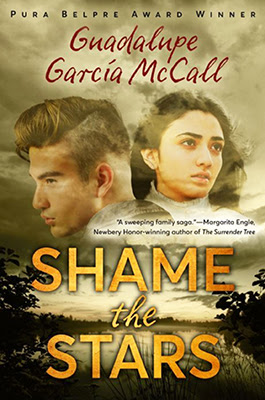 I reviewed Shame the Stars (Tu Books) by Guadalupe Garcia McCall for Lone Star Literary Life! This is fine YA historical fiction set in South Texas in 1915 when the Mexican Revolution spilled over the border and civil rights were hard to come by.

Joaquín and Dulceña are teenagers in love. Joaquín is the privileged, sensitive, traditional son of a distinguished ranching family in South Texas, Tejanos who have owned Las Moras since 1775. Dulceña, daughter of the local printer, is a spirited, smart, modern, independent young woman who wants to be a journalist and travel the world. Due to a political falling-out between their parents, the childhood sweethearts keep their relationship on the down-low.

In 1915 the Mexican Revolution spills across the border and into the couple’s plans. Existing racial tensions, and abuses and vigilante actions of the Texas Rangers, are stoked by the Plan de San Diego and accusations of treason, sedition, and insurrection. When Joaquín’s father’s relationship (“It’s good to know where the snake likes to lay in the brush. It’s the only way to survive”) with Captain Munro of the Texas Rangers (“Munro has no friends, only allies and pawns”) is exposed for the sham it always was, Las Moras, lives, and freedom are threatened.

Shame the Stars by Guadalupe Garcia McCall is fine YA historical fiction. Think West Side Story, think Romeo and Juliet, complete with quinceañera masquerade party and a balcony scene. Inspired by her son’s history lessons, McCall set out to learn a part of our history not frequently taught in Texas classrooms. The result is Shame the Stars, a way for the novelist to contribute to our understanding of our shared past, and, hopefully, informing a brighter future.

McCall affords her complex characters further development, especially Joaquín. The eighteen-year-old’s first-person narrative begins in the conservative, naïve voice of a child, but develops into the nuanced voice of an adult over the course of the novel as he discovers the world, including his parents, no longer fits childhood conceptions.

Joaquín fills his journal with the overwrought poetry of a teenager in love in historical times, as is appropriate. The dialogue sometimes seems stilted and formal, partly reflecting the era, and revolutionary jargon can seem melodramatic. In this example, as Munro’s company of Rangers are approaching the ranch, McCall evidences a gift for the lyrical: “Then, as the minutes ticked off, the devil grew bigger and bigger, gorging itself on dirt and debris, gaining momentum as it galloped toward us, until there was more than dust in its midst and there appeared before us a group of pale riders.”

Shame the Stars tackles big themes: justice (particularly the difference between the fickle goodwill of individuals versus the law and civil rights); issues of identity; factions and betrayal; the power of the written word and the vital importance of a free press. The action proceeds quickly and steadily, the plot developing organically but packing staggering plot twists. A couple of subplots involving land dispossession further illumine the period.

A beautifully designed volume, Shame the Stars is a treat for the eyes with poems from Joaquín’s journal and actual newspaper articles from the time. McCall provides a necessary cast of characters, along with additional reading recommendations, and sources for the articles reproduced as artwork in the book.

Dividing friends and families no less than the U.S. Civil War did, the struggle for civil rights in South Texas confronts Joaquín and Dulceña with the first adult decisions of their lives, as they decide, individually and together, who they want to be.