Review: THE LIGHTS by Brian McGreevy 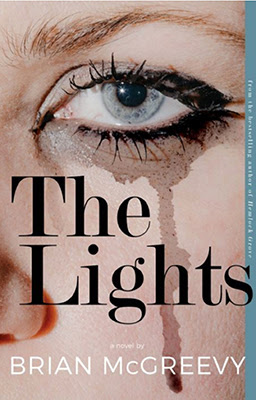 I reviewed The Lights: A Novel (Rare Bird Lit) by Brian McGreevy for Lone Star Literary Life. This is satisfying literary fiction from a Michener Fellow whose brain co-created AMC's The Son (from Philipp Meyer's novel) here recently. You might've heard of it.

Leda and Mark relocate from New York City to a gentrifying East Austin when Leda receives her Hogwarts letter. In this instance, “Hogwarts” refers to the Michener Center for Writers (MCW), the prestigious graduate program in creative writing at the University of Texas at Austin.

The Lights: A Novel is the second novel from Brian McGreevy. Himself a Michener fellow, McGreevy is also cocreator of The Son, a recent television adaptation of Philipp Meyer’s novel of the same title for AMC, starring Pierce Brosnan. The Lights is highly entertaining literary fiction, excelling at sleight of hand with arch humor and misdirection.

The Lights is structurally inventive and creatively designed, written in the form of a letter (“It is at this point that this epistle must make an unforgivable turn for the Dickensian”), the kind you write for “the benevolent cult” of Alcoholic Anonymous to make amends to those you’ve wronged, complete with italics, ALL CAPS, and a stray footnote. The kitschy cover has a kind of Valley of the Dolls–meets-1930s private-eye-pulp-fiction vibe going on.

Austin, where the cicadas create a “wall of sound,” and “a high degree of intelligence and planlessness were virtually prerequisites for residence,” is a character unto itself in McGreevy’s novel. He pays homage to the city and writing center he loves, while simultaneously poking good-humored fun at cultural pretensions; “Well, Terry” is a running joke throughout.

McGreevy’s other characters are hard to like, except for poor Mark, who doesn’t have enough personality to qualify as a character. Just as impatience with Leda’s superficial first-person narrative sets in, and you begin to wonder why anyone desires this woman’s company, much less loves her, McGreevy dives into her backstory, creating a complex, sympathetic psychological portrait of a damaged daughter who learned by example: a mother’s betrayal and a childhood gone badly wrong have created a “manipulator addict by-product of a manipulator addict.” You’d drink, too.

The jealousy and paranoid competition between the grad students are redolent of junior high, the dialogue reminiscent of Gilmore Girls, if they were mean.

“Part of me is still trying to win a philosophical argument,” says Jason the screenwriter, lamenting Hollywood’s lowest common denominator. “Fuck philosophy, what am I, a playwright?”

This combination dangerously approaches caricature early in the novel, but then the almost-farce turns itself inside-out, clichés become people who earn a reluctant affection, and The Lights approaches Merritt Tierce’s Love Me Back, and becomes something approaching profound.