Review: LEGENDS AND LORE OF THE TEXAS CAPITOL by Mike Cox 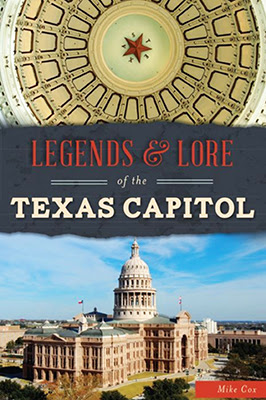 I reviewed Legends and Lore of the Texas Capitol (The History Press) by Mike Cox for Lone Star Literary Life. 'Cause the Texas lege is special, and they're in session.

Mike Cox gets the call in the early morning of February 6, 1983: the Texas capitol is on fire. Cox, a reporter for the Austin American-Statesman, races to the scene. Governor Mark White is there, as are Austin mayor Carole Keeton and Lieutenant Governor Bill Hobby, in whose office the fire began. (Curiously, the current lieutenant governor continues to set things on fire.) From this dramatic beginning, Cox sorts history and myth related to Texas’s beloved sunset-red (it’s not pink) granite capitol.

Legends and Lore of the Texas Capitol isn’t an academic exercise for Cox—it’s personal. His great-grandfather helped build the current capitol during the 1880s, and his grandfather always wanted to write a book about the capitol. Cox’s first paid job was in the building; he worked in the Senate as an assistant sergeant-at-arms in 1965 and 1967. Cox has done prodigious research, building on his grandfather’s previous work. The project is well documented, footnoted, and appendicized, with a bibliography and an afterword appropriately titled “Sine Die.” Contemporary and historical photographs and reproductions of historical documents enhance the stories.

There are lots of fun facts and figures: the capitol is bigger than the one in D.C., as well as the German Reichstag and British Parliament; the interim capitol (between fires) housed the first students of the newly chartered University of Texas; the current capitol was funded by a land sale of three million acres in the Panhandle which became the XIT, the world’s largest ranch; it took four thousand rail cars of granite from Burnet County to build the capitol.

Cox tells the story of how Austin won the last election for which town would be Texas’s capital with the help of the El Paso Plan: hundreds of voters in El Paso County voted for Austin, but the 1860 census would reflect a population of forty-three. We read about a raid on the treasury in 1865, and how some things never change: when the original capitol burned in 1881 it was a total loss because the lege was too cheap to fund fire hydrants on the grounds. There’s a fascinating chapter on the Oak Hill (née Convict Hill) neighborhood. Then there was the time Tex O’Reilly restored freedom of the press for the San Antonio Express-News packing four guns, “one on his hip, one under his shirt, one in an armpit holster and one in his left pocket,” as he stormed into the chamber. Governor Preston Smith went to East Fifth Street for barbecue once upon a time and his state car was briefly impounded because he illegally parked in the O. Henry House lot.

Legends and Lore of the Texas Capitol will help you win bar bets and belongs in the collection of every Texas history buff. Rife with tongue-in-cheek humor, the volume sports such chapter titles as: “Why the Capitol’s Not in Tehuacana,” “Half a Watermelon on a Corn-Crib,” and “Fortunately W.C. Walsh Paid Attention in Math Class.” Murder stories, ghost stories, and love stories are all included, which sounds just about right.

Posted by Texas Book Lover at 3:36 AM