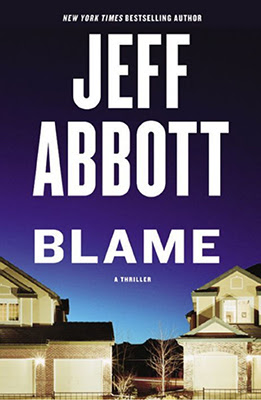 I reviewed Blame: A Thriller (Grand Central Publishing) by Austin's Jeff Abbott for Lone Star Literary Life. This is smart, page-turning suspense. Abbott has all of the mad skills.

“When you lose your memory, it’s a chance for the people around you to rewrite history.”

When she was seventeen, Jane Norton drove a SUV off a twisty road in an affluent Austin suburb, killing her best friend and next-door neighbor, David Hall. Jane suffered a closed-head injury that put her in a coma for four days and erased her memory of the three years preceding the accident (“The old Jane died; every version of David died”). Two years later, nineteen-year-old Jane is homeless, friendless, and family-less: she cannot bear to live in the house next door to David’s parents, and her mother refuses to move; her former friends turned on her, blaming her for popular golden-boy David’s death; she flunked out of college, unable to cope with the stress.

On the second anniversary of David’s death, Jane wakes to a message on social media: “I know what you claim you don’t remember, Jane. I know what happened that night. And I’m going to tell. All will pay.” When David’s mother, Perri, arrives at his grave that morning, “All will pay” is scrawled across the granite in white chalk. These taunts set in motion a chain of events prodding Jane’s memory awake, an intolerable threat to those who never forgot.

In Blame: A Thriller, Austin’s New York Times best-selling author Jeff Abbott explores the function of memory and its relation to identity, the corrosive effects of blame, the nature of regret, and the many forms of culpability. Jane says that “memories are the engines for our feelings.” If our memories are us, what happens when we don’t have memories?

Abbott’s characters are complex and diverse, and feel authentic. Technology is a character in Blame. It’s everywhere: Jane’s mother’s blog, the Dark Web, texting, social media, hackers. It’s fascinating to watch people react when the blame begins to spread, no longer confined to Jane. Perri’s paranoid descent is particularly affective as a study in grief. She is tightly-wound, brittle, ready to snap like a twig in cold weather. “[Jane] murdered the person Perri used to be,” Abbott writes.

He uncannily conjures the interiority of a teenage girl, and Jane’s flaws are refreshing—Abbott has resisted the temptation to perfect his protagonist. What if you recover your memory and discover you don’t like who you were? Blame has elements of a procedural with Jane as the investigator, her amateur sleuthing putting her in ever more danger as she gets closer to the mystery. Abbot presents a buffet of suspects with competing agendas. Who wants what from Jane? And how reliable is our narrator?

Writing with precision, Abbott concisely sets the stage in a page and a half, then incorporates twist after twist into a tight, fast-paced plot. The atmosphere is ominous, the sun-drenched gateway to the Texas hill country incongruously, viscerally creepy. Jane’s third-person narrative places the breadcrumbs masterfully, the momentum steadily escalating until this psychological suspense becomes an action thriller in the last fifty pages.

Abbott is a master craftsman, an architect, Racehorse Haynes building a case for reasonable doubt, brick by brick. Blame left me shaking my head in admiration for his mad skills.