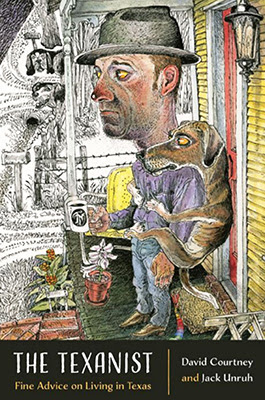 I reviewed The Texanist: Fine Advice on Living in Texas (University of Texas Press) by David Courtney, illustrations by the late Jack Unruh, for Lone Star Literary Life. This little book is great fun, full of playfully illustrated bons mots, fun facts, digressions, “grammatical murder,” and a regrettable pun or two. It would make a lovely Father’s Day or welcome-to-Texas gift.

WWTTD—What would the Texanist do?

The brief essays collected in The Texanist: Fine Advice on Living in Texas were written by David Courtney beginning in 2007 when “The Texanist” debuted as a column in Texas Monthly. The late Jack Unruh produced inspired, whimsical illustrations for each column until his death in 2016. Employing humor sometimes subtle, sometimes laugh-out-loud, Courtney’s advice column attempts to answer questions submitted from those unsure of proper Texas etiquette.

Courtney has impeccable credentials for the position: “Texas-born to Texas-born parents, Texas-raised, Texas-schooled, and Texas-traveled, with a fluency in the language of Texas, the culture of Texas, and the overall Texanness of both Texas and Texans.” He is therefore qualified to answer such questions as:


Q. Isn’t it rude for farmers driving tractors to hog the road and delay traffic?
A. No, although “It is not unusual to experience a miles-long, teeth-grinding, fist-shaking tantrum when stuck behind one of these salts of the earth, perched up on his tractor like a pasha on an elephant, but it is not an admirable response.”

Q. Is it legal to eat roadkill?
A. No, “imagine for a moment what might happen if [it were]: Plenty of ol’ boys would seize the chance to turn their F-150s into weapons. The thought of them out cruising the highways for dinner, swerving this way and that, plowing through fences and over bar ditches in frenzied pursuit of their prey is terrifying to contemplate.”

Q. Is it against the law to pick bluebonnets?
A. No, but “While not officially outlawed, the act of pulling up a bluebonnet remains a Texas taboo of the highest order, worse than even vegetarianism or rooting for the Redskins.”

Letters come from Arlington to Corpus Christi, from Pasadena to Amarillo. Some of the petitioners’ names are withheld due to the sensitive nature of the topic, such as the young woman whose new boyfriend didn’t like Willie. “Nobody is here to tell anybody that somebody has to appreciate a particular musical artist as a prerequisite to being anybody’s boyfriend,” The Texanist begins, “but by shunning Willie’s transcendent tunesmithing, ever-pleasant warble, and overall munificence, this fellow has really shown himself to be, at the very least, a birdbrain.”

Courtney refers to himself in the third person when pontificating (lawns are “the shorn seas of verdancy that surround your abode”), waxing philosophical (“blood is thicker than even discontinued Dublin Dr Pepper”), or quoting from statutes (Texas water law involving something called a “freshet”). He is not below an elegant turn of phrase or above whatever this is: “The Texanist cooks his chili in the very same pot from which the meaty stew of his youth was long ago ladled.”

Unruh’s illustrations are pure genius in both their fine detail and general ambience. Courtney is portrayed as a swarthy fellow, often with bloodshot eyes and in need of a shave, who appears to be cheerfully hung over, whether in a tux, a toga, or an evening gown. The Texanist is always accompanied by Li’l Bubba, a curious creature who resembles a miniature Aztec bird of prey with the nose of Cyrano de Bergerac, wearing a jester’s hat and leopard-print leggings.

In short, The Texanist is great fun, full of playfully illustrated bons mots, fun facts, digressions, “grammatical murder,” and a regrettable pun or two. It would make a lovely Father’s Day or welcome-to-Texas gift.