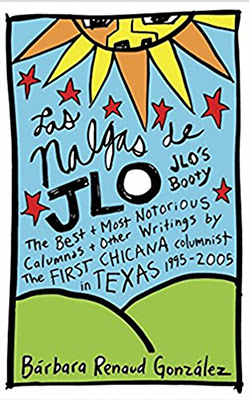 'Daughter of a Mexican mother and a Tejano father, González “tried to share the conversations [her] community was having around the kitchen table.”'

Bárbara Renaud González writes deep and wide: politics from the city council to the United Nations; culture and the appropriation thereof; the links between poor education and an ever-increasing prison population; the deference afforded to, and the outsized power of, big business; climate change, feminism, gender, sexuality, immigration, art, religion, identity—you know, everything. But above all and always, class in our supposedly classless society.

Las Nalgas de JLo/JLo’s Booty: The Best & Most Notorious Calumnas & Other Writing by the First Chicana Columnist in Texas 1995–2005 is the first collection of González’s writing. It includes columns, essays, poems, speeches, reviews, articles, and commentary from such outlets as the San Antonio Express-News, the Los Angeles Times, the Texas Observer, Z Magazine, the Dallas Morning News, Ms. Magazine, and NPR. Daughter of a Mexican mother and a Tejano father, González “tried to share the conversations [her] community was having around the kitchen table.”

González calls out the malicious: “If you’re poor, Black or Latino in this state, our racist history seasoned with our hang-em-high frontier, laced with an eye-for-an-eye Christianity has created a lethal stew of punishment and cruelty.” She’s acerbic with the nonsensical: “it’s ugly to be born brown, but it’s a status thing if you are able to return the color of iced-tea from a visit to Cancún … Brown depends.”

She’s relentless with the hypocritical: “For a man who hung out with lepers, [and] cripples, … Jesus [is] … now real close and personal with senators and governors … Jesus didn’t die … for school vouchers as an answer to unequal public schools … If he were here today, he … wouldn’t live very long before getting shot or going to jail.” González educates the oblivious: “We acquire the trappings of the ethnic—the spiritual retablos and saints, and turquoise drops, the Spanish red roofs. We visit the Paseo of the Arboretum, the suburbs of Las Colinas, the fiestas of summer … But as we continue to acquire, to feast and market a culture, we deny the existence of the culture’s guardians—those Mexican people who have become aliens on their own … we must examine and not just acquire the cultural effects that divide us … our culture [must not be] for consumption only.”

Sometimes González’s writing is unexpectedly lyrical. The frijoles negros in Guatemala are like “a chocolate breeze, a palmful of caviar, the flametip of cognac all at once.” Barbacoa is “silky and juicy and ay, how good it tastes, how the kids are laughing and the grease delicious, like memories slipping from the mouth to the chin to the table. Staining us with the past.”

González insists that we look and that we see. It can be disheartening and infuriating to read the dates on these pieces (“Blaming the Immigrant,” 1996) and realize how much remains the same: “there is here … yesterday has begun again.” Las Nalgas de JLo is an important collection, a gift, not only for Texas, but especially for Texas.