Review: IN THE VALLEY OF THE SUN by Andy Davidson 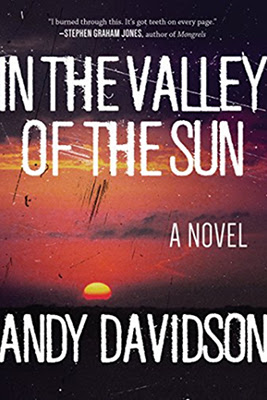 I reviewed In the Valley of the Sun (Skyhorse Publishing) by Andy Davidson for Lone Star Literary Life. This powerful, audacious debut is an unexpected, original synthesis of horror and Western. If Stephen King and James Lee Burke had a love child, he would be Andy Davidson.

In the autumn of 1980, drifter Travis Stillwell washes up west of the Pecos in the fictional town of Cielo Rojo, Texas. After a surreal night at a local watering hole where he meets Rue, a young woman with “skin … light as bone, her hair as red as a fortunate sky,” Stillwell wakes covered in blood inside the camper on his rattletrap pickup, parked in the otherwise deserted lot of the Sundowner Inn, with no memory of the previous night. The old motel and its café are owned by Annabelle Gaskin, “solemn and pretty and not unlined by the life she had made here in the desert,” a young widow and mother of a ten-year-old son. She hires Stillwell to clean up the motel in barter for his stay. You’ll want to point and holler as danger walks among them unrecognized, while the Gaskin farmhouse sits atop a hill overlooking the Sundowner Inn like Norman’s manse in Psycho.

In the Valley of the Sun, Andy Davidson’s debut novel, is an original synthesis of horror and Western with a dollop of police procedural. Part From Dusk Till Dawn, part Fargo, part Something Wicked This Way Comes, it bucks the trend of glamorous vampires. These aren’t Anne Rice’s Old-World vamps, nor Charlaine Harris’s Bon Temps vamps; they are distinctly American, brutally Old-West undead. If Stephen King and James Lee Burke had a love child, it would be Andy Davidson.

Intricately plotted, fast-paced, packing serpentine twists, In the Valley of the Sun progresses inexorably from curious to creepy to oh-my-good-lord-somebody-DO-something. Davidson gifts his characters nuanced backstories, informing their motivations and choices. Two Texas Rangers provide comedic relief as the veteran schools his junior partner. Subplots add dimension without clutter. Ironically, we meet Annabelle on the day of her baptism, another way to be renewed by blood.

Minimal detail subtly anchors the stark West Texas setting with its mesquite, arroyos, pumpjacks “plunging and rearing like giant birds tearing at the land,” and the red Pegasus taking flight from a defunct Mobil Oil station.

Third-person narratives alternate between hunter and quarry; sometimes the two switch places. There’s a cadence to Davidson’s sentences, his arresting phrases. In New Orleans, Rue’s enhanced senses “taste the dirt between the sidewalk pavers, the green grass growing up through the cracks, the salt in the air, the bogs and muddy slick lizard stink of alligators miles away.” In another passage, “A sudden inexplicable sense of the universe in total, a God’s-eye view of all the strands that formed the web,” seizes the veteran Ranger. “Some were straight and true, and others made patterns without purpose, as if the weaver were lost or drunk or simple.” There’s your Burke.

Relentless momentum bounding toward the climactic scenes had me unconsciously holding my breath, consciously trying to stop my eyes from straying furtively to the next page. The payoff is satisfying and unexpectedly graceful. In the Valley of the Sun is a powerful, audacious debut.