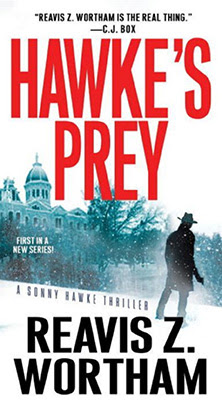 I reviewed Hawke's Prey: A Sonny Hawke Thriller (Pinnacle Books) by Texas's Reavis Z. Wortham for Lone Star Literary Life. This is the first installment in a brand-new series by the author of the popular Red River Mystery series. While uneven, Hawke's Prey has definite promise and is a fun read.

The Syrian students have been ostensibly studying literature, so the go-signal is, fittingly, Something Wicked This Way Comes. Namely, themselves.

Fictional Ballard, Texas (aka Marfa), in nonfictional Presidio County, is rapidly closing shop in the face of a freak blizzard. With the entire region paralyzed, no outside help is coming when an unholy alliance of “radical Muslims,” Mexican cartel members, and homegrown Texas secessionists (“fans of the original Red Dawn”) strikes the county courthouse.

Texas Ranger Sonny Hawke is in the courthouse when the attack begins. His schoolteacher wife (“who weighs a hundred pounds soaking wet and full of bananas”) and their children are taken hostage along with her students, county officials and employees, and random citizens. Ranger Hawke must channel his inner Bruce Willis and save the day, Die Hard–style.

Hawke’s Prey: A Sonny Hawke Thriller is the first in a new series from Texas’s Reavis Z. Wortham, author of the popular Red River Mystery series. Hawke’s Prey is an intuitive, creative synthesis of contemporary politics and policy into an original plot. Backed up by a solid, colorful cast of townspeople, leavening humor, and fast-paced action, it has definite promise.

Wortham writes excellent action sequences and knows how to ratchet tension. The fast-paced action takes off on page two and never stops. Aside from Ranger Hawke’s first-person account, the story unfolds in multiple third-person narratives. These alternating perspectives become unwieldy and intermittently confusing as the same action is relayed multiple times. Wortham’s plot is twisty and full of unexpected elements, and his subplots are expertly woven, a weird sexual proclivity of the attack’s mastermind notwithstanding—it’s merely strange, adding nothing to the story.

With pitch-perfect West-Texas flavor (“mean as a rattlesnake and twice as likely to strike”), Wortham paints a complex picture of Ballard, providing good backstories for his large cast of characters. We all know, and secretly love, the Mayo brothers of our hometowns. A disappointment in this roster is very few women in law enforcement, and we read as much about the physical attractiveness of the woman in the citizen-posse as we do her military experience.

Wortham’s details add dimension and personality: his mercenaries use code names from The Wizard of Oz; there’s a “covey of Red Hat women” in the hotel command post; the ranch hand who never learned to swear fluently in English; a terrorist mastermind with OCD. Wortham does a great job juxtaposing mundane details and the shock of an extraordinary intrusion: seconds before the attack begins, the sheriff is complaining about the snicker doodle-flavored coffee his receptionist is trying out in the office coffeepot.

This first installment of the Sonny Hawke series is uneven, but it is a fun read.