Review: OF BULLETINS AND BOOZE by Bob Horton 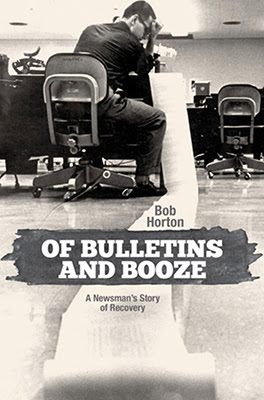 I reviewed Of Bulletins and Booze: A Newsman's Story of Recovery (Texas Tech University Press) by Bob Horton for Lone Star Literary Life. This memoir is a painfully honest cautionary tale from a Texas journalist.

Bob Horton grew up outside of Lubbock in dusty West Texas, the son of dirt farmers trying to eke a living out of cotton. An ambitious, smart, mischievous child whose competitive spirit was nurtured by his mother, Horton was encouraged to excel. “Achieve little victories and people expect bigger things,” Horton writes of his school days. “They speak about how you have potential and can achieve even more.”

He did excel, but, as he found, “the hunger for success can lead one to swallow more ambitious notions than he is capable of digesting.” Horton was a reporter in Washington, D.C., for almost twenty-five years, covering the Pentagon, Congress, the State Department, and the White House for the Associated Press and Reuters, among other news outlets. He won national awards and was nominated for the Pulitzer Prize. “I drank to celebrate my successes,” Horton writes. “I also drank to ease deep-seated fears that I was not only unqualified but also incapable of sustaining the charade for long. I drank my way into alcoholism.”

Of Bulletins and Booze: A Newsman’s Story of Recovery is Bob Horton’s memoir of early success— perhaps too early—in the hothouse of our nation’s capital with a lovely (and patient) wife and young children, and how he did, in fact, lose it all. A midlife crisis began early and lasted late: “old questioning about who I was and where I should be headed … it never occurred to me that drinking might determine where I was headed.” This is also Horton’s story of reinvention and the ongoing struggle of a sober life.

Horton’s narrative weaves forward and back in time, but is roughly chronological. He seems to feel a need to return to his West Texas touchstone. The narrative begins to lose structure two-thirds of the way along, mirroring the downward spiral of his life.

Horton is sometimes introspective (“Something about the world changed the instant the alcohol in the blood hit my brain. Things become extremely pleasant. Any uneasiness or guilt that I might have had faded like the setting sun”), sometimes folksy (“plump as a pampered pup”), and frequently wryly funny (“a lost ball in high weeds”). He writes movingly of his mother’s death at home in hospice care.

There’s a good deal of history here. Details of how the news business worked in the late 1950s and 1960s are fascinating, and will be of interest to both old hands and whippersnappers who don’t know what a teletype machine is. Illustrations and photographs, both posed and candid, enhance the telling, including an invitation (“a high-level y’all come”) to the White House from President and Lady Bird Johnson, a very young Horton in the Pentagon press room sporting horn-rimmed glasses and a burr haircut, and an impressive collage of his press credentials spanning decades.

Horton remains a work in progress, as does any alcoholic, as this painfully honest memoir makes clear.