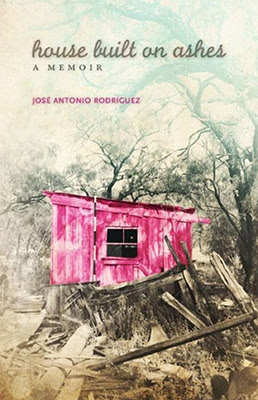 I reviewed House Built on Ashes: A Memoir (University of Oklahoma Press) by South Texas's José Antonio Rodríguez for Lone Star Literary Life. This is an engaging memoir by a writer with a fine eye for detail. Rodríguez uses small details to create a large story.

“The lessons you’ve been taught about that golden land of promise called the United States sparkle before you like a glass of crystal cold water, and you marvel at your good fortune … becoming something mighty and tall with all that no one must ever doubt is right, becoming something you don’t know yet you hope will render you almost unrecognizable to who you are now, becoming one of them, becoming American.”

José Antonio Rodríguez grew up in McAllen, Texas, the youngest of ten children born to a homemaker and a citrus-farm field hand. On weekends, they crossed the river to visit family in the tiny Mexican village where Rodríguez was born. During the summers he worked Panhandle onion fields, as his mother told him to do well in school so he won’t have to pick onions when he is her age. Rodríguez excels and is placed in the Gifted and Talented Program in school. Eventually, he applies for naturalization because the scholarship he needs is only available to U.S. citizens. He’s conflicted when he swears the oath of loyalty, forsaking Mexico forever: “Up until this moment, that village over there across the river with its border guards and police dogs seemed like nothing but outhouses, sweat, and dirt,” Rodríguez writes. “Nothing to miss. Nothing at all.”

House Built on Ashes: A Memoir by José Antonio Rodríguez is the twentieth volume in the University of Oklahoma Press’s “Chicana & Chicano Visions of the Américas” series, the editorial board of which boasts Rudolfo Anaya, Denise Chávez, and Rolando Hinojosa-Smith, among others. House Built on Ashes is Rodríguez’s account of a creative, sensitive, intelligent child growing up not quite here and not quite there; realizing he’s gay as he begins to question the logic of antiquated customs, chafing against a macho culture; learning that there’s no such thing as a small humiliation, and that dignity is essential but costly.

House Built on Ashes is structurally atypical. Loosely chronological, the story is told in lyrical yet spare prose, creating evocative sketches, like linked short stories. Rodríguez has a fine eye for small details that tell a large story and envelop you in a place and time. When his father leaves to find work in Texas, “One day the evening came, but he didn’t. One morning the rooster called but didn’t wake him.” On childhood tradeoffs: “Now we must wear shoes all the time. And the fence keeps people from stopping by to talk to Amá, the way they did on the other side.” On the jarring dislocation of moving to the United States, where his aunt’s house includes a garage: “Why would cars need a room?” Rodríguez is a master of the simile. At the border inspection, they “stare at our hands like we didn’t always have them”; his cousin’s bed is “tall and full like cakes from a bakery,” “her curls tight like her giggles.”

Packing for a Thanksgiving trip from Rodríguez’s upstate New York university to Texas to visit family serves as catalyst to excavate the past. “I think then of who we are before we are taught customs, flags, pledges of allegiance, names of nation-states, their margins on a map, and the armed men who guard them,” Rodríguez writes. “I think of what we lose when we win.”