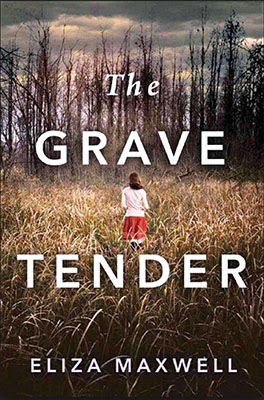 Young widow and mother Hadley Dixon discovers her three-year-old son, Charlie, missing from their farmhouse next to the Neches River in East Texas. Though Charlie is found safe and sound in short order, the traumatic incident serves as a catalyst for Hadley’s deep dive into family secrets. “It was the sins of her family, and her own, that had come home to roost,” Hadley thinks. “Huge hook-beaked birds that fed on carrion. They’d taken her son, then brought him back. To show they could.”

I would add The Grave Tender by Eliza Maxwell to the growing subgenre I call East Texas Gothic, but I think you need a supernatural element for true East Texas Gothic—preferably a witch. But Maxwell hits the other requirements, especially the primordial, haunted landscape that bears witness. “When Jude spoke, her words circled around them in their wooded cocoon,” Maxwell writes, “and Hadley tried to shake off the sensation that the living things around them were all pieces of a whole. That the woods were listening, judging their worthiness to continue on this path.”

The Grave Tender intrigues with its cover—an image of a young woman seen from behind, the picture of innocence in a light pink cardigan as she faces a forbidding wood. The novel delivers on the cover’s insinuations. The Grave Tender is atmospheric and fast-paced, packing plenty of twists, and is unrelentingly dark. Even so, there’s not a lot of foreshadowing; Maxwell will sneak up on you with a matter-of-fact delivery as she manages to stay just this side of melodrama.

Maxwell’s characters are well developed, especially Hadley’s best friend Jude, who possesses a unique voice; as soon as Jude’s dialogue begins we know who’s talking. She provides the only comic relief. Here the child Jude is attempting to name a dog she and Hadley have found injured in the road: “I think we should call her Lucky, but Hadley says she wasn’t very lucky when that car hit her, unless bad luck counts,” Jude breathlessly recounts. “But Bad Lucky isn’t a very good name for a dog.”

Another standout character is Uncle Eli, a Boo Radley sort, who lives in the woods hiding his scarred face from the world in a shack which “could have sprouted out of the east Texas riverbank soil, fertilized by pine needles and motor oil,” Maxwell writes, “raised with loving, calloused hands by trailer park mothers who smelled like cinnamon and menthol cigarettes.”

Precise word choices are evident as Maxwell turns a phrase, as in this description of the child Hadley: “Next to Jude, with her gold-dust skin, Hadley looked like a coloring page that someone had forgotten to color in.” When the young artist Hadley is introduced to painting, she marvels at the names of the paint colors: “Vermilion, burnt umber, ultramarine. Even the words felt exotic. Elegant, like red, orange, and blue, but all grown up and dressed for the opera.”

The Grave Tender is about the the ways we fail each other as parents, siblings, and friends, the choices we make when we think we are doing the best we can, and the power and necessity of female friendship. Told in a series of flashbacks by multiple generations of women, The Grave Tender is dark psychological suspense that skillfully inspires a slow-dawning dread. It will shred you.

Posted by Texas Book Lover at 8:10 AM