Review: THE BOOK OF POLLY by Kathy Hepinstall 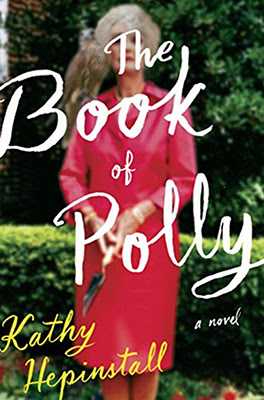 I reviewed The Book of Polly (Pamela Dorman Books) by Kathy Hepinstall for Lone Star Literary Life's Mother's Day issue! This book about the relationship between a mother and a daughter is a gem: funny, touching, and smart.

‘“No one calls my daughter a liar,” [Polly] said, leaning on the word in a way that made me miserable because I was, in fact, a liar. And I had told some lies—and even worse, some truths—about my mother to my classmates. In my defense, she was great fodder, and this was years before she killed our neighbor.’

In a small town outside of Houston, Texas, Pauline “Polly” Perkins Havens, a fifty-eight-year-old widow, gives birth to a little girl, Willow, eight months after the sudden death of her husband. Never knowing her father and not really knowing her much older siblings, Willow is terrified Virginia Slims–smoking, margarita-aficionado Polly will die before Willow can get to know her (“It ruined the feel of guinea-pig fur and the crunchiness of popcorn”), leaving Willow unmoored in the world. Feeling cheated of her family and pressed for time, Willow is obsessed with learning Polly’s secrets (“The story was a blank stare and I wanted it to blink”). And Polly, having escaped her past in the swamps of Louisiana, does have secrets.

The Book of Polly: A Novel is Kathy Hepinstall’s smart, clever, sardonically hilarious, and moving story of the relationship between a mother and a daughter. A woman graces the cover of The Book of Polly wearing a strawberry-red skirt suit reminiscent of Jackie Kennedy, with impeccable hair and makeup, holding a garden trowel, a falcon perched on her shoulder. That’s right, I said a falcon; all will become clear.

The Book of Polly proceeds at a steady pace, not cluttered up with extraneous storylines. Hepinstall’s word choice is precise, her phrasing often a delightful surprise (“In my mind the worst-case scenario loped along like a runaway spaniel, leash trailing, enjoying its freedom and eluding all pursuers”). Hepinstall’s characters are quirky and complex; Polly is a bundle of inexplicable contradictions, like most of us, but mysteriously so to a child. It doesn’t help that Polly and Willow are a lot alike. Willow’s first-person narration, reflecting the imperfect understanding of a child, lends to the mystery.

Hepinstall’s dialogue will have you laughing aloud. Here Polly and Willow are discussing a dinner party during which Polly will try to charm the neighbors into helping pay for their shared backyard fence:

“Jesus says in the Bible to make friends with your enemies and turn the other cheek and really try the nice way first to get them to go in on a fence.”
“I don’t remember that particular verse,” [Willow] said.
“Well, maybe you should stop daydreaming about that Dalton boy in church, sassy brat.”

There is something classic about The Book of Polly, with the garden symbolizing time. “Time kept passing and passing no matter what we did. It had slid inside my training bra and made my breasts grow,” Willow says. “It had killed the eggplant crop and given birth to the peppers. It was, at this very moment, under my mother’s scarf, pulling up hairs like garden weeds.” I’m reminded of Anne Tyler or Jane Smiley, but with Jonathan Tropper’s sharper edge. Think Larry McMurtry’s Terms of Endearment, think Steel Magnolias. Note that Shirley MacLaine starred in both movies.