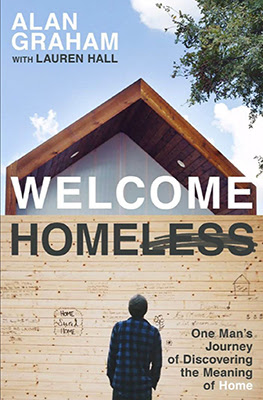 My Lone Star Literary Life review for Easter Sunday was of WELCOME HOMELESS: ONE MAN'S JOURNEY OF DISCOVERING THE MEANING OF HOME (Thomas Nelson) by Alan Graham of Austin's Mobile Loaves & Fishes.


‘Notice it doesn’t say, “Feed the hungry, unless you think he might just have the munchies … Or, “Clothe the naked, unless he doth get drunk on Jack Daniel’s.”’

Alan Graham was struck by inspiration in 1998: food trucks. He envisioned a truck to feed Austin’s homeless where they live. Graham recruited five friends (the “six-pack”), and they pooled their money to buy an old catering truck. Inspired by God’s choice of Mary, an impoverished, uneducated peasant, and the example of Francis of Assisi, Graham understood that it’s about “communion through community, and community through connection,” and “bridging the gap between the divinity of God and dignity of man.” New, warm socks and a choice of Popsicle flavors are useful for this.

Some twenty-odd years later, Mobile Loaves & Fishes has served more than five million meals with the help of more than eighteen thousand volunteers. The mission has expanded to include (“Throw your fear away”) Street Retreats during which volunteers live on the streets with the homeless, micro-enterprises that allow the homeless to earn money with dignity, and the Community First! Village that includes not only housing but a grocery store, workshops, a clinic, a playground, and a dog park, among other amenities.

Welcome Homeless: One Man’s Journey of Discovering the Meaning of Home is Alan Graham’s spiritual memoir and autobiography, but more than that it is an explanation of “the gospel con carne,” and a demonstration of Mobile Loaves & Fishes’ philosophical cornerstone of community. Related in an engaging, colloquial style, and filled with gentle, good-natured humor (“It was like something out of a fairy tale, except instead of a Renaissance era king and queen, it was a badass Latino gangster and his wife”), Welcome Homeless is an inspiration and an exhortation to abandon our comfort zones and to attend not just to the passion, but to the compassion, of Jesus.

Believing human connections are meant to be “relational, not transactional,” Graham befriended the homeless men, women, and children on Austin’s streets, and it changed his life and his faith. “It allowed me to have the kind of faith that doesn’t ignore what’s underneath the overpass … behind the back alley … digging in the Dumpsters,” Graham writes. “It allowed me to know a God that doesn’t pretend what’s happening isn’t happening but, rather, is in the Dumpster too.”

Graham sprinkles facts and figures throughout his narrative, and quotes the Didache, C. S. Lewis, and Saint Augustine, but the bulk is comprised of the stories of people he has met. We go Dumpster-diving with J. P. Burris, meet Gordy the Gentle Giant and a transgender Navajo woman who earned a master’s degree in engineering from the University of Texas while living on the street, and follow the ups and downs of the love story of Brük and Robin. The photographic portraits of these individuals are a thoughtful inclusion.

In the introduction to Welcome Homeless, Graham states his goal for the book: He hopes ‘[we] will start to see the great “I AM” in the “least of these.”’ Mission accomplished, Mr. Graham. I laughed aloud, and I wiped away tears. I can’t imagine a better book for this Easter Sunday.

To help out go here: www.mlf.org.