Review: FIGHT LIKE A MAN & OTHER STORIES WE TELL OUR CHILDREN by Christine Granados 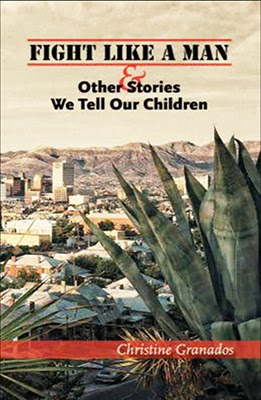 Fight Like a Man and Other Stories We Tell Our Children is reporter Christine Granados’s first collection of short fiction, comprising seven stories and the eponymous novella. Many of these stories were previously published in such literary journals as Huizache Magazine and Langdon Review of the Arts in Texas. This is a strong collection, mostly set in El Paso, Texas, featuring working-class characters, both Anglo and Latin@, chafing against the frequently uncomfortable ties that bind.

The novella Fight Like a Man is a standout. Moníca is middle-aged, married with two teenagers, when she discovers herself pregnant by her younger lover. As she debates her options, Moníca and her half-sister must decide what to do with the ashes of their father, long-deceased, who had two families—one in Juárez and another in El Paso. Moníca is more like her father than she’d like to admit, and so is her lover. It’s complicated.

Granados finds humor amidst grief in “Addressed.” Carmen must call family and friends to break the news of her mother’s death. Paging through her mother’s address book, she finds her Aunt Vanessa listed under “T” for tía, her former stepfather listed under “C” for cabrón. “stupids” is a lesson in why Texas schools need MAS, and I’d like to nominate “Good Father” in a fantastic-first-line competition: “Opening day in Alamo City’s freshly raked baseball field started with all the fanfare and cattiness of New York’s fashion week.”

Another standout is “Shelf Life.” Trini Lopez is a single mother with a thirteen-year-old daughter who she believes “waste[s] too much of her life on … dusty, worn, and dog-eared books.” Her daughter wants shelves so she’ll have somewhere to put her books, but Trini claims not to have the money to spend on bookshelves. As she upbraids her daughter, Trini points with her manicured nails and her gold bangles slide up and down her forearms. So much is packed into these six pages.

Small, deftly observed details (“sand puddles against the curb”) anchor you in a particular place. El Paso is a presence, as is Juárez (the Kentucky Club, San Elizario, the Franklin Mountains, Western Playland), and the seamless mix of English and Spanish is a pleasure, further evoking la frontera. The population has taken the two worlds they straddle and constructed a third.

Polished yet raw, Fight Like a Man is about intimate, intricate human relationships in all their complex motivations and emotional nuance, and how we tend to prefer the devil we know.