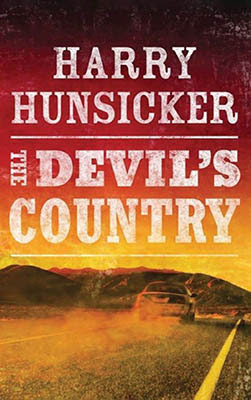 The late writer John Gardner once said there are only two kinds of stories: a man goes on a journey, or a stranger comes to town. In Harry Hunsicker’s new novel, The Devil’s Country, a stranger comes to a strange town. The fictional Piedra Springs is the Twin Peaks of West Texas.

Former Texas Ranger Arlo Baines steps off a Greyhound bus in the tiny, remote (“badlands between Odessa and Sonora”) Piedra Springs. Baines is an admitted “sucker for lost causes, stray pets, and people who couldn’t quite fit into the groove of life.” Sure enough, outside a bar during a thunderstorm Baines stumbles across Molly (who “looked like something from Little House on the Prairie”) and her two children. She tells Baines she and her children have escaped and if he doesn’t help them, they’ll be killed. Then the town’s tornado siren begins screeching. Baines takes cover inside the bar, and when he goes back out after the all-clear to look for the woman and her kids, they’re gone. When Molly’s body is found the next day, Baines falls under suspicion and must solve the mystery and find the missing children to clear his name.

Hunsicker knows his small West Texas towns, fictional or no. Of Piedra Springs he writes, “You either had business there or were trying to avoid business somewhere else.” But when a storm approaches they are blessed with “a cool wind that smelled like ozone and sage.” For a dying town, Piedra Springs has a lot going on: Russian mafia, a mysterious Bentley driving around, public corruption, bankers (“to not pay was a grave sin, a heinous crime, akin to … voting for a socialist”), a cult (“the Old and New Testament mixed with Star Trek”), a sort of underground railroad, and the dark web.

Baines’s first-person narrative is told in choppy, simple prose. Great genre-phrases include, “Jimmy and Dales’ Broken Promise [a bar] … had a low ceiling and even lower expectations.” The town sheriff has a Texas drawl “strong as new rope.” Though Hunsicker has a habit of announcing what his characters will do next instead of just doing it (“I decided to check if someone at the restaurant had seen Molly leave the parking lot,” Baines announces to us), this is infrequent.

Hunsicker is surprisingly moving at times, and leavens the mayhem and darkness with humor. “Wisdom comes from the strangest of places,” Baines muses, “like a philandering Texas Ranger in a Chinese restaurant a hundred miles past the exit for the middle of nowhere. Bubba Confucius.” And sometimes he waxes eloquent: “Men have been men since time began. Some have lusts best not described, for fear that others will fall prey to their particular strains of darkness.”

The Devil’s Country features a quirky cast of characters, plus many secrets and subtexts, and is packed with unexpected turns and twists. If this is the first in a new series, the premise of a lone ranger on the road offers practically inexhaustible possibilities. Hunsicker sets the hook in a short prologue, and the action hurtles forward until the very end with expert clue placement and a distinctive Texas noir style.