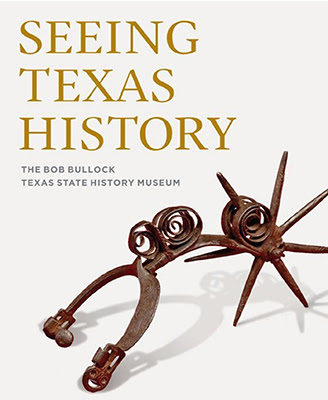 I reviewed Seeing Texas History: The Bob Bullock Texas State History Museum (University of Texas Press), edited by the museum's director Victoria Ramirez, for Lone Star Literary Life. Bob Bullock would be proud of his namesake, and of this beautiful book.

“Seeing and engaging with original evidence of the past informs our understanding of Texas and makes meaning of the present.”

The late, great Bob Bullock, lieutenant governor of Texas from 1991 to 1998, began discussing the idea of a Texas state history museum in 1995: “As great as this state is, we have no state museum in our state capital, a magnificent museum where our history can be properly displayed.” As happened so often, Bullock wished it, and it was done. One of his last public appearances was at the groundbreaking ceremony for the museum in April of 1999. Sadly, he did not get to see his pride and joy open to the public in 2001.

Seeing Texas History: The Bob Bullock Texas State History Museum, edited by Victoria Ramirez, the museum’s director, with an introduction by Ramirez and Jan Bullock, is a coffee-table format book celebrating fifteen years of original artifacts on display and special exhibitions at the official state history museum of Texas. From high art and pop culture, to folk crafts of daily living and marvels of scientific frontiers, more than eighty color plates of sumptuous, uncannily high-definition images on heavy, glossy stock reflect “the richness, diversity, and complexity of the state,” from before we were Hispania Nova, through independence and statehood, to the wonders of NASA and integrated circuits (which won Jack Kilby a Nobel Prize in physics in 2000).

More than fifty special exhibitions have been hosted at the museum over the years, bearing titles such as “It Ain’t Braggin’ If It’s True.” Perhaps most famously, the public got to watch experts reconstruct La Belle, one of La Salle’s ships, the wreckage of which was found in Matagorda Bay three hundred years after she sank (La Belle is now permanently at anchor in the atrium of the museum’s first-floor gallery). Seeing Texas History showcases many of the artifacts found on board.

“For most visitors [to the Bullock], it is the people of Texas that make for a vibrant state, reminding us that behind every artifact is an individual who conceptualized, made, used, and imbued the object with significance.” Seeing Texas History does justice to the history of Texas, and to the Bob Bullock Texas State History Museum. It belongs on every Texan’s coffee table, and would make a splendid gift for your favorite Texas history fan. Bob Bullock would be proud of his namesake, and of this beautiful book.