Review: THE NEARNESS OF YOU by Amanda Eyre Ward 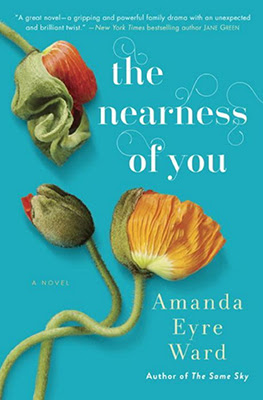 I reviewed Amanda Eyre Ward's new novel, The Nearness of You (Ballantine Books), for Lone Star Literary Life! This is an honest, complex look at motherhood from a multifaceted writer.

“There are many ways to become a mother.”

Hyland and Suzette Kendall, an architect and a heart surgeon, respectively, have been happily married, settled into successful lives, for fifteen years. They’ve made the mutual (more or less) decision not to have children before they married, but Hyland, in some sort of mid-life crisis (“Is this it? Is that all?”), decides what’s missing from his life is a child. He wants to have a baby and, due to Suzette’s concerns about passing on a familial tendency to mental illness, suggests they use a surrogate mother.

Twenty-one-year-old Dorrie, a literary sort who currently works feeding penguins at an aquarium on Galveston Island, needs the money for college, which she cannot otherwise afford. A conflicted Suzette reluctantly agrees, and her carefully controlled life, constructed to stave off uncertainty and ambiguity, threatens to buckle, along with her equilibrium.

Set in Houston (“a city with personality—loud and bright, faintly marshy and rotten around the edges”), The Nearness of You: A Novel is Austin writer Amanda Eyre Ward’s seventh novel, following 2015’s much-praised and preternaturally timely The Same Sky. Spanning seventeen years and multiple perspectives, The Nearness of You is an honest exploration of the dichotomies inherent in motherhood (“[Children] make my entire life worthwhile — they are literally my whole reason for being, and I love each one so much my heart could burst,” says Suzette’s best friend, “and yet I wish I didn’t have them almost every day. Usually around six.”), and the struggles of damaged people to overcome haunted childhoods.

Ward sets the hook in the brief prologue and follows through with a fast-paced, tightly plotted tale with many twisty turns and skillful foreshadowing—portents ignored. Though a couple of plot points seem highly improbable, the benefit of the doubt can be extended to desperate circumstances.

Ward is a multifaceted writer. The Nearness of You features gentle humor (“Hyland had ordered mimosas, a bad sign,” Suzette notes. “After fifteen years of marriage, day drinking generally led to a queasy afternoon nap followed by dry mouths, pizza for dinner, and the sense that they should be having more sex. Thirty-nine was a confusing age”); there is an urgency to the medical scenes; and she masters the small details which evoke a particular lifestyle and the disparate personalities of her complex characters.

The design team for The Nearness of You created the perfect dust jacket. Cheerful, bright, and pretty, the dustjacket evokes spring with its flower bulbs in various stages of fecund eruption, reminding us of new beginnings, ova, seeds, sprouting things, opening things, fertility—but one of the bulbs appears to be withering. Hope springs eternal.

Adroitly employing an economy of words, Ward tells a large story in this slim book. The Nearness of You is both as large, and as small, as the human heart. There’s no lifeguard at the gene pool, and as Suzette finally determines, “Mothers are forged.”