Review: THE INEXPLICABLE LOGIC OF MY LIFE by Benjamin Alire Sáenz 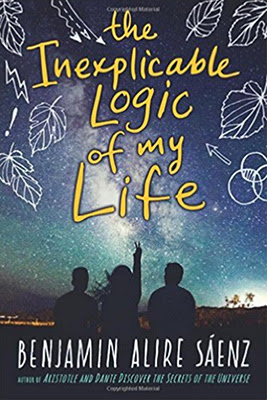 I reviewed The Inexplicable Logic of My Life (Clarion Books) by El Paso's Benjamin Alire Sáenz for Lone Star Literary Life. This is a heartwarming coming-of-age story in which Sáenz inhabits Sally on the cusp of “life beginning,” bringing his first-person narration uncannily alive in beautifully rendered relationships. Sáenz has done the thing that is the reason for fiction.

Seventeen-year-old Salvador “Sally” Silva likes his life. What he doesn’t like is change. Beginning his senior year at El Paso High School, Sally has a great relationship with Vicente, his adoptive father; a steadfast best friend of many years, Samantha “Sammy” Diaz; and a loving extended family of aunts, uncles, cousins, and his grandmother Mima. But when Sally, an easygoing guy with “a control thing over [himself]” who prefers “keeping it calm,” gets into a fistfight on the first day of school, he begins to wonder about his “bio father” for the first time, and doubting that he really knows himself at all. “Maybe the kind of guy I was was like someone I didn’t know,” Sally thinks. “You know, the guy I’d never met whose genes I had.” Then Sally’s Mima gets sick, his father’s former boyfriend returns, and his friends’ lives are turned upside down, forcing Sally to confront impending adulthood and question what it means to be a man.

The Inexplicable Logic of My Life is the new young-adult novel from PEN/Faulkner award-winning Benjamin Alire Sáenz. This is a heartwarming coming-of-age story in which Sáenz inhabits Sally on the cusp of “life beginning,” bringing his first-person narration uncannily alive in beautifully rendered relationships.

Sally wants the human heart to make rational sense, but he and his friends learn that there are as many ways of loving as there are people on the planet. Mima feeds people; Vicente loves his sports-loving brothers by reading the sports pages of the newspaper so he can have a conversation with them; Uncle Mickey loves by slipping money into the hands of his nieces and nephews. Sally discovers “love is difficult and complicated,” and that love, not blood, creates a family.

These characters are sharply delineated individuals. Sammy is beautiful, smart, ambitious, and emotionally volatile. “She could be a storm. But she could be a soft candle lighting up a dark room.” Vicente is a Columbia-educated painter and professor of art, a gay Mexican American who loves art because “it civilized the world.” Fito is an “intellectual” who ends every other sentence with “and shit,” who walks “like a coyote looking for food” and whose mother barters her Lone Star card for meth.

The Inexplicable Logic of My Life is a long book, but a quick read; it just flows. Language and the magic of words are important to these characters, and Sáenz’s choices are precise. His teenage dialogue sounds authentic, especially the “verbal volleyball” between Sally and Sammy. Happily, El Paso is a presence in this story. “I like that you could see and smell the border in the air and on the streets,” Sally says, “and in the talk of the few people we passed who spoke the special kind of language that wasn’t really Spanish and wasn’t really English.”

I will miss these characters. To paraphrase Sally, I like who these kids are becoming. Sáenz has done the thing that is the reason for fiction.