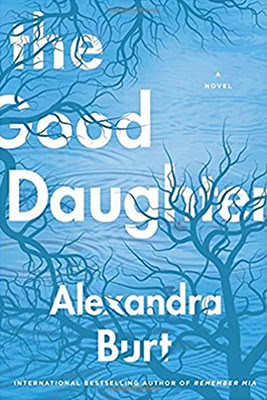 I reviewed The Good Daughter (Berkley Publishing Group) by Texas's Alexandra Burt for Lone Star Literary Life. This East Texas Gothic blend of mystery, suspense, and the paranormal had me listening more closely to the sound of my home contracting in the cool of the night after a particularly warm February day, and doing double-takes at movement caught by the corner of my eye.

“The dead sometimes remain and nothing good has ever come from sticking around.”

Eighteen-year-old Dahlia Waller left the small East Texas town of Aurora right after high school graduation and never looked back. Fifteen difficult, disappointing years later she returns, moving in with her mother, Memphis, determined to finally get some answers to her past. Who is Dahlia’s father? Why did she and her mother move so often, usually in the middle of the night (“another one of her cloak-and-dagger operations”)? Why did Dahlia not attend school until the eighth grade? Why did Memphis never sign a lease or take a job that required paperwork? “This child [Dahlia] has called on fate to stomp its foot, determined to resolve itself.”

When Dahlia discovers the body of a woman half-buried alive in what locals call the “Whispering Woods,” she sets a series of events in motion that upend her life and the lives of everyone around her. The secrets her mother has kept for half a lifetime begin to emerge and unleash a chain of events that we’re not sure they can survive.

The Good Daughter: A Novel by Alexandra Burt is an eerily atmospheric blend of mystery, suspense, and the paranormal. The Good Daughter is an exploration of how the brain functions—the generation and assimilation of emotions, the interpretation of sensory impressions, the power of suggestion, and the processes of memory, and asks, What do we owe the living and the dead? What is freedom, and does the truth truly set you free?

The narrative moves between Dahlia’s first-person account and the third-person accounts of three other women: Memphis, her fragile mother (“Memphis Waller is no longer a Pollock painting, full of vibrancy and complex colors. She is a mere watercolor image, watered down so much that she almost vanishes”); Quinn, a damaged, unhappily married woman (“infertile … as if she were a stretch of land without any rain, and littered with rocks”); and Aella, a reclusive woman who lives in the woods “with potions and salves and bottles containing strange things.”

Well and intricately plotted, usually moving quickly, Burt’s story spends as much time in the past as in the present. Subplots enrich and inform the main narrative, and well-placed clues (including the structure of the narratives themselves) tantalize. Burt occasionally strays into the purple (“her pores fecund with the scent of transgression”), but not often enough to distract.

There’s something about East Texas. If you’ve spent time in the Big Thicket, or wandered off the trails around Caddo Lake, you know what I’m talking about: a sometimes unsettlingly feeling of the primeval, of something gathering itself, of being observed by hidden eyes. This atmosphere inspires a subgenre I call East Texas Gothic. The Good Daughter joins the ranks of Cynthia Bond’s Ruby and Keija Parssinen’s The Unraveling of Mercy Louis as a great example of this. The Good Daughter had me listening more closely to the sound of my home contracting in the cool of the night after a particularly warm February day, and doing double-takes at movement caught by the corner of my eye.