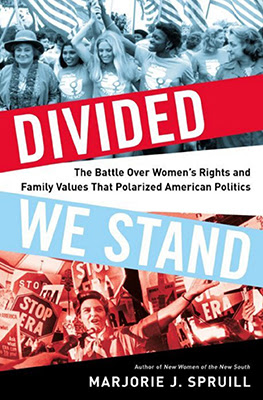 I reviewed Divided We Stand: The Battle Over Women's Rights and Family Values That Polarized American Politics (Bloomsbury Publishing USA) by Marjorie J. Spruill for Lone Star Literary Life. I laughed, I cried, I fist-pumped.

Gloria Steinem refers to the National Women’s Conference, held November 18-21, 1977, in Houston, Texas, as “the most important event nobody knows about.” Twenty thousand women attended the conference. These delegates were Democrats and Republicans, ranging from students to housewives to the presidents of national groups such as the League of Women Voters, the National Federation of Business and Professional Women, and the National Organization for Women. The star-studded cast included Bella Abzug, Margaret Mead, Betty Friedan, Texas’s Barbara Jordan, Maya Angelou, Jean Stapleton (aka Edith Bunker of All in the Family), Coretta Scott King, and three first ladies of the United States.

With a remarkable degree of unity, a National Plan of Action titled The Spirit of Houston was adopted at the conference and presented to President Jimmy Carter. This plan included recommendations on education and employment discrimination, equal access to credit, extending social security benefits to homemakers, aid to elderly and disabled women, prevention of domestic violence, rape, and child abuse, ratifying the Equal Rights Amendment, and greater participation for women in foreign policy, among other issues.

“Solidarity among feminists was not the same as solidarity among American women,” Spruill notes. As the conference began, across town fifteen to twenty thousand people converged on the Astro Arena for a Pro-Life, Pro-Family Rally, headed by Phyllis Schlafly. Schlafly was the leader of Stop-ERA (Stop Taking Our Privileges), and she created the right-wing Eagle Forum to “combat women’s lib,” which they were convinced was a Communist plot to knock American women, “beneficiaries of a tradition of special respect for women which dates back from the Christian Age of Chivalry,” off the mythical pedestal.

Divided We Stand: The Battle Over Women’s Rights and Family Values That Polarized American Politics is Professor Marjorie J. Spruill’s account of the events leading to the National Women’s Conference, the disappointing results, and the rise of social conservatives. “There were two women’s movements in the 1970s: a women’s rights movement that enjoyed tremendous success,” Spruill writes, “and a conservative women’s movement that formed in opposition.… Each played an essential role in the making of modern American political culture.” Spruill draws a direct line between these two movements and the rigidly divided electorate of today.

Spruill provides a concise history of second-wave feminism and the rise of social conservatives, as well as a detailed account of the historic gains of feminism in the 1970s. Heavily footnoted, the narrative bogs down intermittently in names and acronyms, but Divided We Stand isn’t a strenuously academic work, and is quite readable for a general audience.

Divided We Stand is filled with countless priceless details of the times. Airline executives defending before Congress their policy of “measurement” checks for stewardesses claimed the checks were “essential to their business.” Representative Martha Griffiths asked, “What are you running, an airline or a whorehouse?” Checkmate.

Spruill’s epilogue does a superb job of wrapping up events since Ronald Reagan took office, including the 2016 election, which is a tall order. An important contribution to a time and a subject that should be better known, the story told in Divided We Stand retains its relevance, and indeed has renewed urgency.