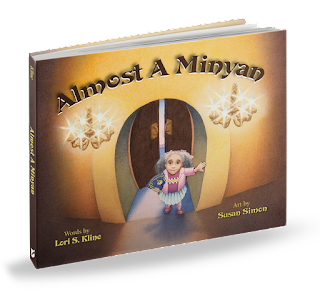 Will she be the one to take Grandfather’s place?

According to Jewish tradition, a quorum of ten adults is required for public worship. Almost a Minyan traces the story of a young girl whose father and grandfather are regular participants in the town’s minyan - until her beloved Zayde passes on.

Without him, it is even harder for her father to find enough people to make a minyan. Then one day, he brings Zayde’s tefillin to his eldest daughter. A striking new addition to the diverse books movement, Almost a Minyan shares important Hebrew terms and religious concepts through a compelling and beautifully illustrated story for children.

PRAISE FOR ALMOST A MINYAN:

“A warmhearted introduction to coming-of-age in a worship community.”

“A story of inclusion, belonging and equality. I loved the modern, egalitarian, and traditional values shared in this meaningful story. This is a wonderful modern story for our children and grandchildren!”
Cantor Deborah Katchko-Gray
Congregation Shir Shalom, CT
Founder of the Women Cantors’ Network

“A delightful read for girls and boys alike, this poetic family tale brings a wonderful sentimentality to daily Jewish prayers. Moreover, the beauty of the illustrations contributes additional warmth to this snapshot of Jewish life. A nice addition for all libraries and all ages.”
Rabbi Jimmy Kessler, DHL, DD
Congregation B’nai Israel, Galveston

One Generation at a Time
Guest Post by Lori S. Kline

I have been asked many times how and when it was that I first started writing. I think it possible that I was holding a pencil in utero during my Mother's pregnancy. I hear it was an uncomfortable time for her, and I am guessing that there was not enough womb in the womb for my creative expression to take form. In the decades since that time, I believe it has taken the form of writing children's stories and poetry, geared both toward children and adults. Almost a Minyan is an expression of many heartfelt thoughts, feelings and values that emanate from my love of Jewish practices and traditions. It is my hope that children reading this book, by themselves or with adults dear to them, will add pleasure to their Jewish experience through the eye of the daily minyan.

My book utilizes rhythmic wording and child-like language to address several serious  issues confronting American Jewry today. We see Jewish communities struggling to bring together  members for even the shortest of prayer services, and that is truly a shame. The book also highlights the critical nature of transmitting Jewish traditional practices from one generation to the next, through the sweet, devoted relationships between the “tween” girl, her father, and the girl's “Zadie” (grandfather). Most of all, however, Almost a Minyan is a coming-of-age book, in which I hope I have relayed the empowering nature and thrill that can accompany becoming an adult in the eyes of Judaism.

But let's back up for a moment. What is a minyan? It is a gathering of 10 adult Jews who form a quorum for prayer. One of the basic pillars of the Jewish religion is Community, and the minyan is a subset of that community. For many  congregants in mourning, gathering a minyan to recite Mourner's Kaddish feels especially critical, as it is also on the Hebrew anniversary date. Other prayers also require the presence of a minyan. All told, these prayers remind us that we are one People with sacred traditions and practices that bind us to our shared God and to each other as a community.

Almost a Minyan addresses several issues I never encountered as a girl from a larger city. For me, it was easy being Jewish. Learning to speak and read Hebrew had the magical feel of a secret code in addition to connecting me to my People. Keeping Kosher—observing the Jewish dietary laws that include refraining from eating dairy and meat in the same meal—felt almost like a distinct handshake that identifies one member to another within a special club. My friends and I celebrated Jewish holidays and weekly Friday night dinners at home with family and friends. I eyed my mother with admiration as she lit the Sabbath candles each Friday night, and I never questioned that it was only males who could lead services and read from the Torah. But for many women—especially in small towns—not being included in a minyan felt exclusionary and prevented their congregations from reciting prayers that were important to them both personally and as part of their Jewish community. It was only when I relocated to Austin, Texas, in 1984, to attend college, that I was exposed to small town issues and my writer's hand began to twitch.

Egalitarian shifts were taking hold. At first, simply seeing women standing on the, bimah (sanctuary stage) and “being counted” as part of a minyan felt very odd—almost heretical. Then I, myself,  learned to chant Torah and became a lay liturgical leader. I taught elementary-age religious school, served as a bar- and bat mitzvah tutor and later lead Tot Shabbat services for years. I wrote and directed many silly, yet informative theatrical plays to engage the kiddos in biblical stories. I firmly believe that if we instill fun and love for Judaism in our youngsters, it holds the power to continually transform them into loving Judaism as they mature. Writing has long been my gift and thus, it is the vehicle by which I share my passion and devotion to Judaism. It is my hope that Almost a Minyan plays a small role is my furtive attempt to see that the transmission of our Jewish tradition and practices continue through our children, “l'dor vador,” one generation at a time. 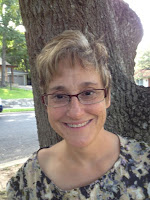 Lori Sales Kline heralds from Squirrel Hill in Pittsburgh, PA, which hosts a wonderfully rich Jewish community that fueled her love for Jewish tradition, ritual and practice at home and at, “the shul.”  Following her undergraduate and graduate work at the University of Texas in Austin, Lori chose to make Austin her home, largely due to the spiritual connection she felt in the close-knit Austin Jewish community.  In her spare time, Lori enjoys camping, celebrating Judaism with her husband and son, and friends. She previously authored the children’s picture book,  Josiah’s Dreams. 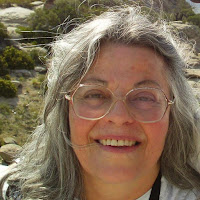 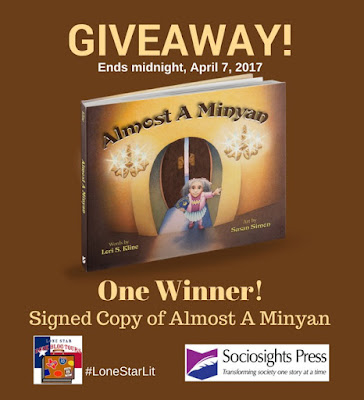