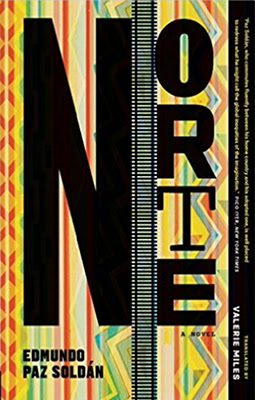 I reviewed Norte (University of Chicago Press) by Edmundo Paz Soldán, translated from the Spanish by Valerie Miles, for Lone Star Literary Life. This English translation of a story of displaced people couldn't be more timely.

‘In Spanish there’s an expression, “perder el norte,” which means to lose one’s way, to lose sight of a goal, to lose control, to lose the sense of where is up and where is down on a compass.’

Three tales are told in Norte: that of Jesús, a serial killer from Northern Mexico who rides the rails across the United States; that of Michelle, an aspiring graphic novelist and dropout from a Latin American literature doctoral program in Texas; and that of Martín, a schizophrenic artist locked in a California asylum, whose works eventually hang in the Guggenheim and the Smithsonian. Each of these characters have immigrant origins (some legal, others not): Argentina, Bolivia, Mexico. Everyone here is addicted to something: substances, sensations, emotions, people, power; and none of their American dreams are turning out as they’d hoped.

Norte, an unflinching exploration of displaced people (“my wife and children are here Your Honor, I’m a political refugee from my country Your Honor, if you send me back the narcos are going to kill me Your Honor, Your Honor, Mister Lawyer, sir, mister, mister, please, please, please”), and physical and emotional violence, is Edmundo Paz Soldán’s ninth novel, and the third to be translated into English. Originally from Bolivia, Paz Soldán is a professor of Latin American literature at Cornell University. His previous works have won the Bolivian National Book Award and the Juan Rulfo Short Story Award, among others. Valerie Miles, translator, editor, writer, and professor of literary translation at Pompeu Fabra University in Barcelona, Spain, translated Norte from the Spanish.

Norte’s construction is unusual, more a series of linked short stories than a novel. The narratives move backward and forward in time between 1931 and 2009, and the settings range from Texas to California to Mexico, and roam the country with Jesús on the railroads. In the end, these narratives come together in creative and unexpected ways.

In unadorned prose with a noir-ish quality, Paz Soldán shifts seamlessly between characters, settings, and perspectives, conveying stark contrasts. Jesús is uneducated, crude, and psychotic; Michelle is educated, middle-class, and aimless; Martín is haunted, anxious, and poignant. Jesús’s and Martín’s narratives are told in third person, Michelle’s in first person.

Norte seems to draw from Paz Soldán’s biography. He pokes fun at the insular academic world (“so self-absorbed, fascinated at hearing ourselves speak”), and Michelle’s creative breakthrough mirrors his own experience with the development of Norte. Paz Soldán also draws from actual people and events. Jesús was inspired by the real Railroad Killer, and Martín is Martín Ramírez, whose works do hang in museums throughout the world. Paz Soldán’s channeling of Martín’s inner world is particularly moving, his imagery evocative (“Shadows conspired with each other along the rooftops”).

The publication of the English edition of Norte couldn’t be more timely. “Or what if nobody was forced to migrate anymore? Leaving one’s place on earth is a cruel experience.”