Review: THE DIME by Kathleen Kent 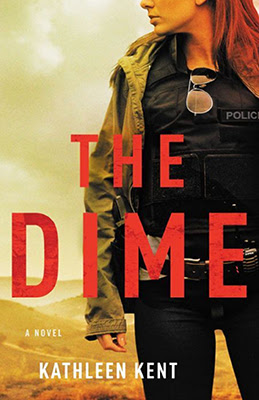 I reviewed The Dime (Mulholland Books) by Dallas's own Kathleen Kent for Lone Star Literary Life. This thriller is a successful departure for the best-selling writer of historical fiction. The fast pace and whiplash-inducing twists will keep you reading, and the complex, richly drawn characters will make you care what happens to them.

Elizabeth “Betty” Rhyzyk, a gutsy, smart, unconventional detective from a family of Brooklyn cops, moves to Dallas and joins the police department’s narcotics unit. The first investigation she runs in Dallas, involving Mexican drug cartels and East Texas meth cookers engaged in a turf war, spins out of control. As the bodies begin to stack up, Rhyzyk acquires a sadistic stalker, and the action takes a startlingly brutal turn.

The Dime, the first in a new mystery/suspense series, is also a change of genre for Kathleen Kent, best-selling author of historical fiction. Detective Rhyzyk‘s first-person narrative begins with a bang and doesn’t let up. Fast-paced and tightly plotted, The Dime serves up whiplash-inducing twists and an (unfortunately) politically timely white nationalist-supremacist element, with “Old Testament revelations … of such monstrous proportions that they would make even sleeping infants cry and feral dogs slink away in terror,” reminding me of Texas’s own David Lindsey.

Kent provides Rhyzyk a richly detailed backstory, and a refreshingly realistic relationship with Jackie, her girlfriend of eight years, a pediatric radiologist whose family disapproves of the couple’s “lifestyle” (“hom’sexiality”). The Dime’s cast of supporting characters is diverse and satisfyingly complex. Kent allows her characters and their relationships to each other the development they deserve, and makes us care about their lives and fates.

Dallas is a character in The Dime, and Texans will feel as if they’re on a ride-along with Rhyzyk. They’ll also appreciate a New Yorker attempting to adapt to “Texas … the only place in the known universe … that actually got hotter after the sun went down,” where a dog-walking suburban woman packs a “Beretta with a diamond-pavé grip” (a Valentine’s Day gift, natch). “Texans … will froth at the mouth when delayed thirty seconds at a red light,” Rhyzyk says, “but will wait an hour for three fried eggs and a minute steak.”

Kent is a multi-faceted and multi-talented writer. Her action scenes are exhilarating; her humor alternating between teasing (“never trust a short man with a tall list of grudges”), and sharp (“What’s the difference between yogurt and Texas? … Yogurt’s the one with the live culture”); her dialogue snappy (“Stop trying to make me feel better,” Rhyzyk tells her partner, “I’ve gotten worse ass-drubbings from my grandmother.” “She the one that was the nun?”). Kent’s style with the darker elements of The Dime is visceral, evoking chills and causing me to squirm in my chair.

The Dime isn’t all action and cleverness, though. These characters are also introspective. “If not for Jackie, my idea of emotional self-help would be half a bottle of Jameson,” Rhyzyk admits. “I’d be living out of a suitcase, all my T-shirts would be black, and I’d still be buying underwear in the boys’ section of Target.”

Benny, Rhyzyk’s late uncle and mentor, provides insight. “That’s the thing about cults,” Benny says. “They not only dig the ditch, they lie in it, cover themselves over with dirt, and then cry about how dark the world has gotten.”

Speaking of cults, the construction of the climax to The Dime is ingenious, the tension excruciating. The denouement nicely tees up the second installment, leaving one crucial question dangling. I await the next novel in this series happily, if impatiently.