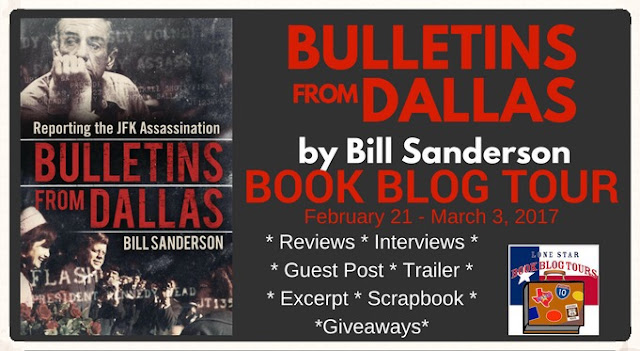 BULLETINS FROM DALLAS
Reporting the JFK Assassination
by
BILL SANDERSON 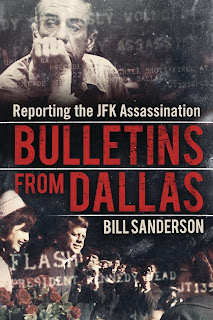 Thanks to one reporter’s skill, we can fix the exact moment on November 22, 1963 when the world stopped and held its breath: At 12:34 p.m. Central Time, UPI White House reporter Merriman Smith broke the news that shots had been fired at President Kennedy's motorcade. Most people think Walter Cronkite was the first to tell America about the assassination. But when Cronkite broke the news on TV, he read from one of Smith’s dispatches. At Parkland Hospital, Smith saw President Kennedy’s blood-soaked body in the back of his limousine before the emergency room attendants arrived. Two hours later, he was one of three journalists to witness President Johnson’s swearing-in aboard Air Force One. Smith rightly won a Pulitzer Prize for the vivid story he wrote for the next day’s morning newspapers.

Smith’s scoop is journalism legend. But the full story of how he pulled off the most amazing reportorial coup has never been told. As the top White House reporter of his time, Smith was a bona fide celebrity and even a regular on late-night TV. But he has never been the subject of a biography.

With access to a trove of Smith’s personal letters and papers and through interviews with Smith’s family and colleagues, veteran news reporter Bill Sanderson will crack open the legend. Bulletins from Dallas tells for the first time how Smith beat his competition on the story, and shows how the biggest scoop of his career foreshadowed his personal downfall.


***
PRAISE FOR BULLETINS FROM DALLAS:


“So much of what we know about any story depends on how reporters do their work. Bill Sanderson takes us through every heartbreaking minute of one of the biggest stories of our lifetime, with sharp detail and powerful observations. As you read the book, you’ll feel all the pressure and adrenaline rush of a reporter on deadline.” —Neal Shapiro, former president of NBC News, current president of WNET

“The life and work of a noted White House reporter…. Focusing on [Merriman] Smith’s reporting of the Kennedy assassination, for which he won a Pulitzer Prize, Sanderson conveys the tension and confusion after the event, as Smith and other newsmen scrambled to ascertain facts.” —Kirkus Reviews

“To read Bulletins from Dallas is to touch the fabric of history, through Sanderson’s artful weave of many voices, from presidents across the decades to the last words uttered by J.F.K. Swept back through the corridors of time, we hear the urgent bells and clatter of the teletype machine: Merriman Smith’s first report to the world, ‘Three shots fired at President Kennedy’s motorcade today in Downtown Dallas.’ This compelling narrative takes us to that moment when our whole nation cried, and, even now, to tears of primal sympathy that never seem to end.” —Allen Childs, author of We Were There: Revelations from the Dallas Doctors Who Attended to JFK on November 22, 1963

How long have you been writing?
I’ve been writing for pay since I was 18 years old -- much like Merriman Smith, the protagonist in Bulletins from Dallas. I had my first paying newspaper job in 1978, more than 38 years ago. Smith started writing for newspapers when he was in college in the 1930s and kept it up to his death in 1970.

What kinds of writing do you do?
Mainly I’ve written for newspapers. I estimate that during my 32 years as a full-time news reporter -- from 1981 to 2013 -- I had between 6,000 and 7,000 newspaper bylines. I still write for newspapers and websites, but not as much as I used to. Bulletins from Dallas is my first book.

What was the hardest part about writing this book?
Gathering information. The guts of the book are well known. Merriman Smith, the White House reporter for United Press International, hogged the only radiotelephone available to the reporters riding in President Kennedy’s Dallas motorcade. This let him report the shooting in Dealey Plaza five minutes ahead of his competitors at the Associated Press -- a huge scoop. But by itself, that’s not enough of a story for a book. The book's success depended on whether I could learn more about Smith and his life, and how the assassination fit in it.

When I started, I wasn’t sure how much I would find. Luckily Smith's family was very cooperative with recollections and giving me access to information about his personal letters. Also, I found a big cache of his personal papers at the Wisconsin Historical Society -- I spent a week there taking notes and making copies of everything I could.

Altogether, it turned out to be a heck of a story. The book covers Smith’s life and career before and after the Kennedy administration. He had a really interesting relationship with Lyndon Johnson which few people today know about. Some who knew Smith think the assassination was a factor in the problems that led him to kill himself in 1970. If you read the book, you can decide that for yourself.

What were the biggest surprises you learned during your research?
I uncovered two long-forgotten documents about Merriman Smith and the news coverage of the assassination.

One was a letter from Smith’s competitor, Jack Bell, written a month after the assassination. Bell complained bitterly that Smith boasted too much about being the first to get the assassination story on the newswires. Bell wrote this note on the letterhead of his employer, the Associated Press. Everyone knew Bell was angry about how Smith beat him reporting the assassination. I don't think anyone alive today knew that Bell put his anger in writing.

Another was a letter from Smith to his bosses written just before he left for Texas with President Kennedy. Smith was behind on his expense reports, and his bosses at United Press International did not give him an advance for the trip. Smith was pretty angry about this and went into his assignment in Texas in a foul frame of mind.

What did you enjoy most about writing this book?
The process of writing itself. Once I had the material I needed, it was fun to sort it into a story with a beginning, middle and end. Also, I happen to enjoy rewriting and editing -- cutting stuff, adding stuff, doing the work of making it make sense.

Who are some of the authors you feel were influential in your work?
Among fiction writers -- I really like Willa Cather and Somerset Maugham. I grew up on the farm in New Hampshire where Cather edited My Antonia. She’s a great story teller, and she did the research a good fiction writer needs to do to make her characters and stories seem real. Maugham had a lot of good ideas about the process of writing. He said he considered himself in the first row of the second rank of British writers -- I think that’s about right, and I admire that kind of honesty and clear thinking. The Moon and Sixpence is one of my favorite novels of all time.

Among non-fiction writers -- right now I’m a fan of Michael Lewis, for the way he takes incredibly complicated topics and makes them understandable and interesting. Also I’m catching on to Sarah Vowell. Assassination Vacation was one of the books I read to prepare for Bulletins. Vowell is a lot of fun; I like her spin on things like religion in the Massachusetts Bay Colony and late 19th-century US politics. And I’m an Erik Larson fan -- I especially liked In the Garden of Beasts.

Who would you cast to play the main characters in Bulletins from Dallas?
Tom Hanks would be a great Merriman Smith. He’s about the right age and I think he’d get across the right mix of cynicism and gravitas needed to portray Smitty. I’d have Billy Bob Thornton play Jack Bell. I think Bell was a guy with a lot of nervous energy -- but his energy went in all the wrong directions. 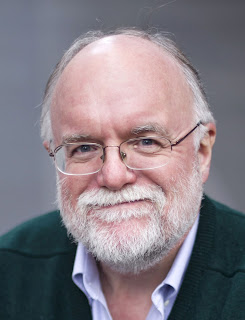 Bill Sanderson spent almost two decades as a reporter and editor at the New York Post. His work has also appeared in the Wall Street Journal, the New York Observer, and the Washington Post. Sanderson lives in New York City. Connect with Bill: 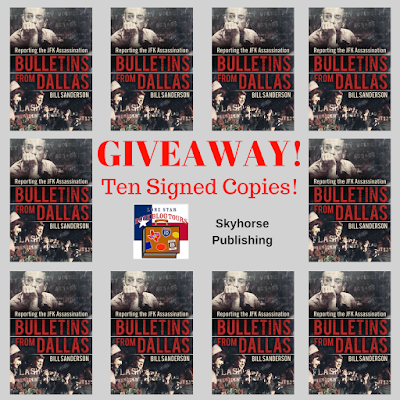