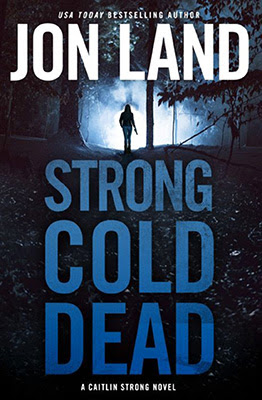 I reviewed Strong Cold Dead: A Caitlin Strong Novel (Forge Books) by Jon Land for Lone Star Literary Life. This is the eighth installment in this series, an audaciously spirited mystery/suspense, with a little horror, and a little science fiction, for good measure.

“Nature takes care of its own, Ranger, and we are its own.” —White Eagle, Comanche shaman

Texas Ranger Caitlin Strong is on desk duty after a dustup involving Mexican cartel apprentices in San Antonio, when trouble between a drilling company and Native American protesters sends her into the Texas Hill Country to investigate a mutilated body discovered just off the reservation. History is preparing to repeat itself as Caitlin returns to where the Strong family legend was birthed. The case has strong echoes of similar circumstances investigated in 1874 by Caitlin’s ancestor, the first Ranger Strong.

Strong Cold Dead: A Caitlin Strong Novel is the eighth installment in Jon Land’s mystery-suspense series starring the fifth-generation Texas Ranger. It can be read as a standalone, but I recommend beginning at the beginning. The backstories of the recurring characters, and history of their relationships to each other, will make understanding the underlying currents easier.

A hallmark of this series is Land’s use of Texas Ranger history, skillfully woven into the present-day tale. Land names the prolific Texas historian and author Mike Cox in the acknowledgments, and quotes T. R. Fehrenbach and the Bullock Texas State History Museum’s “The Story of Texas” in epigraphs introducing each part of the narrative.

The action in Strong Cold Dead centers around a fictional Comanche reservation, but ranges near and far, from Houston and Dallas to the Middle East and an Inuit village in Canada. The international cast is vivid and similarly varied. There’s a psychic bingo caller, formerly a member of the Venezuelan secret police; a decorated veteran turned enforcer for the New Orleans mob (now retired), who has philosophical conversations with a root beer–swilling ghost; Homeland Security honchos; Native American shamans; ISIS operatives; denizens of the Deep Web; a Royal Canadian Mountie; and a descendant of Peta Nocona. This is a partial list.

Despite a few odd word choices (“swirling” tunnels) and instances of purple prose (“those who sought their demise”), Land can turn a phrase. When a bad guy disparages the threat Caitlin poses, he’s admonished, “Pistols don’t come in genders.” Of a persistently annoying character, Caitlin muses that he “just like a bottle top, kept sticking to her boot and scratching everything it touched.” Land is also funny. “You find shit to step in, no matter how well the pile is hidden,” Caitlin’s supervisor tells her. A young man attempting to stash a pistol in his waistband ruefully remembers his father’s advice: “I warned you about those skinny jeans, son, didn’t I?”

However, Land’s concoction is original.

Strong Cold Dead is a creative hybrid, blending mystery and suspense with elements of horror and science fiction. You’ll have to suspend disbelief, but you’ll be rewarded and appreciate Land’s inventive, audacious spirit.