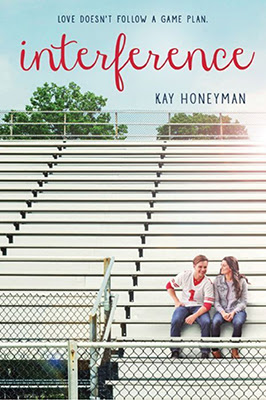 I reviewed Interference (Arthur A. Levine Books) by Kay Honeyman for Lone Star Literary Life. This YA fiction coming-of-age-as-a-fish-out-of-water story should be required reading for politicians with teenagers. Slip it in with their briefing books.

Kate Hamilton and her parents have returned to her father’s roots in the fictional town of Red Dirt, Texas (“the hairy, dry big toe of the earth”), in the aftermath of a political scandal that was kinda sorta Kate’s fault, culminating in her father’s dropping out of a re-election campaign for his congressional seat in the Hamiltons’ adopted North Carolina.

Culture shock ensues as sophisticated, politically savvy, sixteen-year-old Kate works on transitioning from Washington, D.C., to a rural West Texas high school (“You [Kate] took a class called Ethics of Science. I’m not really sure what that is, but since you had credit for biology, physics, and chemistry, I put you in Agricultural Sciences”) in the middle of high school football playoffs (where Kate discovers the joys of Frito pie). When her father decides to challenge his former high-school teammate for Red Dirt’s congressional seat in a special election, all the old stresses return. After several false starts, Kate learns that interference earns you a penalty in life, as well as on the football field, even if you’re trying to help.

Interference is Kay Honeyman’s second young-adult fiction title. Kate’s first-person narrative of a coming-of-age-as-a-fish-out-of-water story should be required reading for politicians with teenagers. Slip it in with their briefing books. There is more to Interference than first meets the eye.

The characters are evenly divided between stereotypical and complex. Kate is particularly interesting. Confident, smart, dedicated, and talented, she’s also frequently a presumptuous busybody, forever practicing political spin on everyone in her path, especially driven to level the field when she uncovers inequity. Kate has a good heart, but she’s convinced she can fix anyone and any situation—a “win-win,” in her family’s political parlance. The character and relationship development afforded Kate and her father are particularly affective.

Interference is equal parts comedy and drama, befitting teenagers. Honeyman excels at dialogue. A conversation between Kate and a friend:

“People change. Not everyone is determined to be a complete jerk their entire life.”
“I think you underestimate Kyle’s commitment.”

Instructions from a campaign manager to her volunteers:

“Stick to the phone script, people,” India said in the living room. “I want to know what they think of the candidates, not what happened at the eye doctor.”
“How is Gladys?” someone called out.

There are clever metaphors in science class (“Ants are more powerful as a group than individually. They create whole empires with collective will”), and Kate’s love of photography (“The darkroom at my old school had been my sanctuary. It was easy to control. You timed every step. There were no politics, no power plays. Everything was black and white, light and dark”). Honeyman has a just-right, light touch when things get heavy.

Interference has a well-constructed plot, moving along quickly and steadily, packing several nice twists. City kid moves to hick town is a familiar, comfortable scenario, but Honeyman’s tale feels fresh thanks to her engaging characters, and timely thanks to the political themes. It’s a win-win.