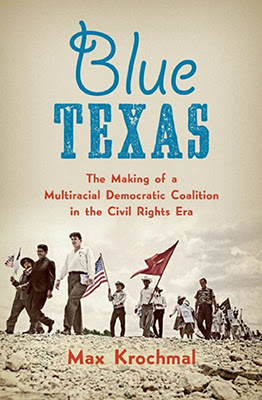 I reviewed Blue Texas: The Making of a Multiracial Democratic Coalition in the Civil Rights Era (University of North Carolina Press) by Texas Christian University assistant professor of history Max Krochmal for Lone Star Literary Life. Krochmal tells a fascinating story that belongs in every classroom.

“This book is about the other Texas … the hidden Lone Star tradition of community organizing, civil rights, trade unionism, and liberal, multiracial coalition building.”

In the 1930s, against the backdrop of the Great Depression, and inspired by the New Deal, African Americans, Mexican Americans, and mostly Anglo labor organizers and community activists in Texas began a decades-long journey toward each other. Each group began individually, in their several neighborhoods: the Mexican American pecan shellers striking in San Antonio; Anglo labor striking Ford in Dallas; Smith v. Allright, in which the U.S. Supreme Court struck down the white primary, was born in Houston. Eventually the separate groups reached tentatively across the color line and found they were stronger together. For most it wasn’t about ideology, but about living conditions. This journey culminated in a multiracial coalition able to elect liberal politicians in support of a broad civil rights program.

Blue Texas: The Making of a Multiracial Democratic Coalition in the Civil Rights Era by Texas Christian University assistant professor of history Max Krochmal is the latest addition to the University of North Carolina Press’s “Justice, Power, and Politics” series. Employing extensive archival sources and original interviews, Krochmal tells a fascinating story. He is under no illusions about the forces arrayed against further progress, nevertheless his style is infectiously hopeful and inspiring.

Krochmal contends we can use history as a blueprint for moving forward, if only we knew the history. What did he learn? The coalition succeeded because it “both recognized and transcended racial difference … prioritized the needs of its most vulnerable partners. … its most privileged members … plunged headlong into the fight for black and brown civil rights. The whites backed up their words with action … The more liberal, the more explicitly integrationist, the more militant the tactics, the more effective the coalition became.”

The process was not smooth; the Cold War (Fun fact: San Antonio put red stamps on the “subversive volumes” in the public library) threw a wrench into the works and the assassination of JFK almost killed it off. The coalition fought corruption, political machines, bossism, big business, and a toxic white supremacist society which confused privileges and rights. Each step forward was met by the inevitable conservative backlash and breathtaking violence.

Krochmal’s report of “KKK” carved into the stomach of a protester is horrifying; his relation of the desegregation of Crystal City schools is thrilling. As an academic work, Krochmal’s tome is minutely detailed, dense with facts, figures, and acronyms. Blue Texas is not an easy read, but it is a fine accomplishment, and an important addition to our understanding of the struggle for the most basic Civil Rights in this state.

We are not taught this history in our elementary or secondary schools. There are names we never learned, but should revere: Moses and Erma LeRoy, Albert Peña, G.J. Sutton, Hank Brown, Dr. Hector P. Garcia, B. T. Bonner, George and Latane Lambert, and Emma Tenayuca, to name a mere few. That’s not just a shame, it’s education malpractice. A history to be proud of, this information belongs in every school curriculum. Blue Texas is a call to action. 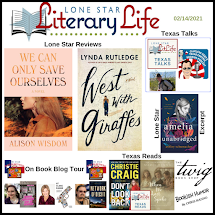