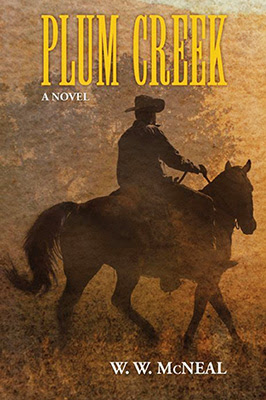 I reviewed Plum Creek: A Novel (TCU Press) by W.W. McNeal for Lone Star Literary Life! This is an impressive debut novel from the original Texan, and already into it's second printing. Check it out.

Plum Creek opens with a funeral. In the fall of 1869, a week before Billy McCulloch’s sixteenth birthday, his father, Wesley, “accidentally hung himself in a forked branch of a tree” on his way home from a saloon. One of the mourners at his father’s service is the legendary Texas Ranger Colonel Jack Hays, a stranger to Billy. Hays is there to pay his respects to his former colleague and collect on duties owed. A few days later, Billy, his uncles, and a former slave called Gruder set off with Hays to hunt down a renegade “half-breed” Comanche who has kidnapped Hays’s niece and slaughtered her family.

Plum Creek is retired lawyer and original Texan W. W. McNeal’s debut novel. He nods to T. R. Fehrenbach and John Graves in his acknowledgments, and it shows in the text. Plum Creek is skillful, sometimes lyrical, western fiction, a coming-of-age story with plenty of adventure and Texas history, a little mystery, and lots of soul.

Peopled with colorful characters—some seeking vengeance, others doing penance, some both (including John Wesley Hardin, portrayed in a cameo)—Billy is especially resonant, reflecting the impatience, frustration, and incomplete understanding of adolescence. “Riding behind the three men who would most influence him, [Billy] believed in the justice of his kin and therefore the justice of their cause.” Billy must face hard truths about his society, including racism and war: “It was as if his grandfather was stuck in a particular time and space and the world was moving on.”

Other standouts include Gruder, the former slave, who practically raised Billy, and Ashley Maitland, a lawyer with the unhappy job of probating Wesley’s will, and maneuvering through the politics of Reconstruction-era Texas (“occupied territory”), who muses on the “adventure of fools and scoundrels, dreamers and failures . . . the most impractical and improbable undertakings” that is Texas.

Plum Creek possesses a wry sense of humor. Billy’s grandfather is a Primitive Baptist preacher, a denomination which doesn’t allow instruments in church, but Billy’s grandmother has a piano at home. “If the Lord only wanted to hear voices in church,” Billy wonders, “why would he want to hear the piano in the parlor?”

McNeal’s imagery is vivid. A flooding river is “a roiling chocolate,” and the “wind and rain hitting the cottonwood trees sounded like the whispers of old women.” Texans will enjoy the detailed geography, which helps visualize the odyssey, as Hays’s posse roams Comanchería around Bandera and the Medina River.

Evenly paced and intricately plotted, Plum Creek has multiple subplots. The hunt is interwoven with happenings back home, and therein lies my sole quibble with this novel. These subplots include romance, business, and politics. While each casts considerable light on some of the more minor characters, they interrupt the narrative flow of Billy’s adventure. On the other hand, these seemingly tangential threads are drawn together in the climax as the characters converge in San Antonio.

McNeal is a gifted novelist. He should write another.