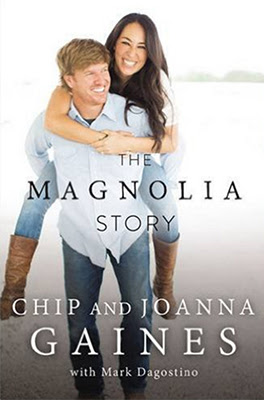 I reviewed The Magnolia Story (W Publishing, an imprint of Thomas Nelson) by Chip and Joanna Gaines for Lone Star Literary Life! This memoir is sweet and inspiring, as expected, but also surprisingly candid and absorbing. If you've a Fixer Upper fan to buy for this holiday season, they'll love this book.

Risk-averse introvert Joanna met impulsive, outgoing Chip in the waiting room at her father’s Firestone store in Waco, Texas. Chip was ninety minutes late for their first date, then he didn’t call for two months. Despite this inauspicious introduction, Joanna gave him a second chance. This case of opposites attracting is the beginning of love, family, and a business in which houses and found objects also benefit from second chances. Married in 2003, Chip and Joanna are now an empire. Most of us know them from HGTV’s hit series Fixer Upper, but the Gaineses are also the proprietors of Magnolia Homes, Magnolia Realty, and Magnolia Market at the Silos, a large retail development in downtown Waco. Their new memoir tells us how they did it, and gives a small sneak peek into what might be next for Texas’s unofficial sweethearts and busiest couple.

The Magnolia Story by Chip and Joanna Gaines (with Mark Dagostino, a former writer for People magazine) is written in a skillful mirror of the television show. Joanna is engaging and sincere; Chip is entertaining and goofy; she grounds him, and he energizes her. They inspire each other, and together they’re more than the sum of their parts.

The Magnolia Story is sweet and inspiring, as expected, but it’s also candid and absorbing. The Gainses share their early days together, the milestones, and the successes as well as the setbacks. Joanna’s first-person narration is regularly augmented, and intermittently interrupted, by Chip’s commentary. The two points of view are printed in different fonts, an effective format for keeping things straight when they’re finishing each other’s sentences.

The Gaineses spill on plenty that we don’t know from the show. For example, did y’all know that Joanna, a communications major, worked under Dan Rather, interning for 48 Hours in New York? And there was the time Chip was arrested for unpaid tickets incurred for violations of Waco’s leash laws. It was the principle of the thing.

Joanna writes movingly of the times when she and Chip didn’t balance each other out, and of personal epiphanies that both improved family life and contributed to her design philosophy and unique aesthetic. Chip, the “serial entrepreneur,” writes of his early beginnings in business when, as a child, he sold juice boxes to the kids at tennis camp, and Scantrons at Baylor on exam days. Sitting in business classes at Baylor, Chip stared out the windows and daydreamed of trading places with the lawn crew.

Favorite Chip quotation, riffing on do-it-yourself repairs of times past: “You found this old spare part, you did this other thing, you hooked it up to a donkey, and you tried it out.”

The magnolia serves as a fitting metaphor for this story. “Have you ever looked at the bud of a magnolia flower?” Joanna asks. “It’s a tight little pod that stays closed up for a long time on the end of its branch until one day, out of nowhere, it finally bursts open into this gigantic, gorgeous, fragrant flower that’s ten times bigger than the bud itself.”