Review: BITTER WATERS: THE STRUGGLES OF THE PECOS RIVER 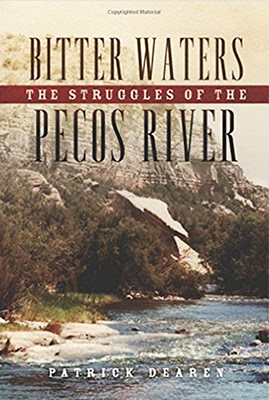 The headwaters of the Pecos originate 13,000 feet up in the Sangre de Christo Mountains of New Mexico. “Fed by snowmelt, springs, and monsoon rains,” writes author Patrick Dearen, “the Pecos plunges over dramatic Pecos Falls within its first four miles and tumbles on down out of the Sangre de Cristos’ elongated horseshoe of thrusting peaks and massive ridges.” The Pecos proceeds on its way to the Amistad Reservoir where it mingles with other tributaries on their way to the Gulf of Mexico.

The first historical record we have of the character of the Pecos River is from a Spanish expedition in 1583. Antonio de Espejo christened the stream El Salado (salty). By 1942 the National Resources Planning Board declared that “[f]or its size the basin of the Pecos River probably presents a greater aggregation of problems … than any other irrigated basin in the Western U.S.” The challenges include, but are not limited to, decreasing flow, recurring droughts, salinity, sedimentation, golden algae, low oxygen levels, the needs of endangered species, recreational overuse and abuse, and thickening of watershed brush (imported salt cedars).

The Pecos River Resolution Corporation (PRRC), incorporated in 2007, is a nonprofit “dedicated … to documenting the Pecos River of the past and present … [and] exploring remedies for its ills and its potential for the future.” Bitter Waters: The Struggles of the Pecos River is the first stage of this project and also represents Midland resident Patrick Dearen’s more than thirty years of personal exploration of the river.

Dearen brings his novelist’s skills to natural ecology, and he does an excellent job of relating the inter-relatedness of things. As a result, Bitter Waters is more literary than expected. Dearen’s prodigious research provides a wealth of well-organized facts and figures snugly wrapped in narrative. Carefully chosen photographs, many from Dearen’s personal collection, enhance the text.

One of the most basic considerations when attempting to “restore” the Pecos is determining a baseline target. Is it 1583, 1961, or sometime in between?

The Spanish began irrigation farming in 1794; dams, reservoirs, and canals appeared in the late nineteenth century; drilling of wells began in 1911. As early as 1891, the issue of flow in such salty water was identified. Waste from mining enterprises was dumped directly into the Pecos. The federal government did their part by mismanaging protection of the headwaters and watershed with policies that suppressed wildfires and allowed overgrazing. Project Gnome, an initiative of the Atomic Energy Commission, detonated a nuclear bomb underground, over an aquifer that ultimately emptied into the Pecos at Malaga Bend, in 1961. The amount of salt carried downstream, threatening the Amistad “reservoir’s future as a municipal water supply for two nations,” became an international issue in 1964. Climate change spurs the northward spread of the Sonora and Chihuahua Deserts. Texas and New Mexico have fought in legislatures and courts for decades over apportionment of the life-giving Pecos.

The future of “an enormous expanse—from northern New Mexico to the mouth of the Pecos and on down the Rio Grande to the Gulf of Mexico” is at stake. Whether or not the Pecos River can be saved remains an open question.

Posted by Texas Book Lover at 7:55 AM