Review: WHO KILLED THESE GIRLS? 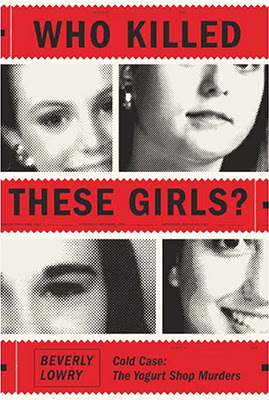 My new review for Lone Star Literary Life: WHO KILLED THESE GIRLS?: COLD CASE: THE YOGURT SHOP MURDERS (Alfred A. Knopf) by Austinite Beverly Lowry. This is intelligent, harrowing, atmospheric true crime. How do we know what we think we know?

Every Austinite, every Texan, knows the basic facts of this horrific crime. On Friday, December 6, 1991, the Austin Fire Department responded to a report of a fire at an I Can’t Believe It’s Yogurt! shop in northwest Austin. Inside the shop, they discovered the bodies of Eliza Hope Thomas (17), sisters Jennifer Ann Harbison (17) and Sarah Louise Harbison (15), and Amy Leigh Ayers (13).

Finally, in 1999, four young men (“three aimless dudes, one troublemaker with firepower and wheels”) were arrested, despite the complete lack of physical evidence. Two were never brought to trial because the case against one was dismissed, and a grand jury twice refused to indict the other; but two confessed, later recanting confessions that ultimately turned out to be false (“I’m scared I have information and don’t know I have information”). They were convicted, but those convictions were reversed and the cases remanded by the Texas Court of Criminal Appeals. In 2008, DNA results, thanks to more sophisticated testing than was previously available, excluded all four suspects.

Accordingly, the most confounding and fascinating aspects of Who Killed These Girls? is a discussion of interrogation techniques and an exploration of the nature and processes of memory and the phenomenon of false confessions. How do we know what we think we know?

Who Killed These Girls?: Cold Case: The Yogurt Shop Murders by Beverly Lowry is the latest entry in a recent spate of high-profile narrative nonfiction titles on Texas true crime. Who Killed These Girls? is a dramatic story told in dramatic fashion. Lowry writes in lively first-person, her personality apparent on every page. This is an effective and engaging technique, informal and colloquial, that only occasionally strays into the purple. Lowry’s account grabs you on the first page and doesn’t let up.

Lowry conducted prodigious research, attended court hearings, watched the recorded interrogations, and interviewed the principals. She even got her hands on Judge Mike Lynch’s personal journal. Her recreations of the police interrogations are harrowing, even frightening. Lowry does an outstanding job of invoking the girls as human beings. They are quite real and very present in these pages. Her portrayal of detective John Jones is likeable and sympathetic.

Lowry’s writing is atmospheric, sometimes spooky (“by Thursday the air had turned sulky, with an unnatural stillness that makes people testy as they wait for whatever’s about to happen next”), sometimes an assault (“Jennifer … wore a Timex wristwatch with a big face and a sturdy black band. She will die wearing the watch, it will stop at 11:48”), sometimes startlingly snarky (“Robert Ayers, who once again told tender stories about his daughter”), sometimes, but infrequently, seemingly gratuitously graphic.

There’s an unexpected, sardonic humor to Lowry’s narrative. “With its big-time celebration of Eeyore’s birthday, its dog parades, costumes and flummery, Austin was Slackerville,” she writes, with “rock music, goofball pot smokers and drunken legislators … While Houstonians liked to say Austin was hoping to become a grown-up city, too, someday, nobody here took offense. Who wanted to be like Houston?”

Twenty-five years later, we still don’t know who killed these girls. “Yogurt Shop jurors did their job, so did the lawyers and the judge. But in the end, nobody was satisfied with how things turned out. Nobody at all.”