Review: TWENTY-SIX SECONDS: A PERSONAL HISTORY OF THE ZAPRUDER FILM 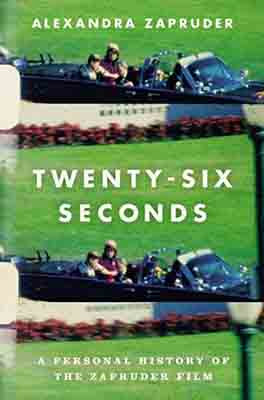 I reviewed Twenty-Six Seconds: A Personal History of the Zapruder Film (Twelve Books) by Alexandra Zapruder for Lone Star Literary Life! This is an important contribution to history, rich with detail, and a profoundly personal tale.

Twenty-Six Seconds: A Personal History of the Zapruder Film is a labor of loving curiosity for historian Alexandra Zapruder, who was ten months old when her grandfather Abraham Zapruder died. She feels as if she had always known, through a sort of osmosis, that he had taken a home movie of the assassination of President John F. Kennedy, but their family never talked about it. “[The film] was almost completely compartmentalized from our family identity, our stories, and our sense of ourselves,” Zapruder writes. She wanted to understand what effects association with the film had wrought on her family.

The death of Zapruder’s father was the additional impetus she needed, so she began the research. Zapruder collected files from her father’s attic, letters and photos from her aunt’s home in Dallas, documents from the family’s attorneys and the National Archives. She interviewed key players and conspiracy theorists alike, and was the first to be granted access to Life’s archival materials. Zapruder decided that her “family’s insistence on dignity and restraint when it came to talking publicly about the film had left a vacuum in the public story.”

Zapruder’s narrative is often highly technical, packed with minute detail. The film is twenty-six seconds long, consisting of 486 frames, each frame one-eighteenth of a second long. Zapruder addresses head-on the oppressive avalanche of press coverage and some of the claims made about her family: they were greedy, selfish, immoral, profiteers. Some of the insults came embellished with anti-Semitism. Zapruder is passionately protective of her loved ones, often to the point of defensiveness, but also quite funny: “[T]he film felt a bit like having an unsightly birthmark … something we were born with, but it didn’t define us. I was used to it and no longer particularly noticed. But I didn’t expect people to point it out, either.”

Zapruder includes rich detail of family history in Czarist Russia and Jewish Brooklyn. Small details are affecting. On the film, before the footage in Dealey Plaza, are images of Abe’s grandchildren and employees at his dress manufacturing plant. “The screen flickers again and they are in bright sunshine, outside on Dealey Plaza.” Zapruder evokes the tension and horror of the assassination. Scrupulous facts are woven into an intensely personal, sometimes painful, family history.

The family struggled through the years to “strike the right balance between personal legacy and public responsibility.” Thorny legal, ethical, and moral issues — sometimes mutually exclusive — are well and thoroughly discussed, such as “whether an individual’s interest in historically significant images should supersede a corporation’s right to control the content that it owned,” the “takings” clause of the fifth amendment to the U.S. Constitution, and copyright law, among many others.

Perhaps most fascinating, and most difficult to assess, is Zapruder’s exploration of the psychology of the film: we must “imagine a time before people were routinely bombarded with moving footage of violence multiple times a day.”

Twenty-Six Seconds is an important contribution to our understanding of history on a grand scale, and to the personal history of a private family reluctantly thrust into history’s spotlight. In the end, people wanted the film to do what it could not — provide the answers to what happened to JFK.
Posted by Texas Book Lover at 8:54 AM