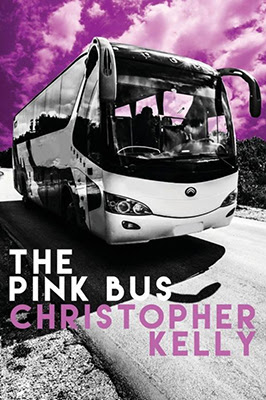 I reviewed The Pink Bus (Lethe Press) by Christopher Kelly for Lone Star Literary Life. This is fine literary fiction about the first out gay man to run for the United States Senate from Texas.

Patrick Francis Monaghan, the first out gay man to run for the United States Senate from Texas (“Homosexualis Texas Politicus – something exotic or endangered”), steps out onto the front porch of the Fort Worth Stockyard Museum and is shot. As he lies there, in and out of consciousness, he ponders the “cosmic cruelty that here he was dying—at age forty, just when he had found what had eluded him for so long, a place in the world.” Monaghan experiences a series of flashbacks from his life, beginning in kindergarten at P.S. 42 in Staten Island, New York, where he was called “Peppermint Patty” by the other kids, an “epithet [that] would stick to him like gum in a girl’s long hair.”

The Pink Bus by Lambda award winner Christopher Kelly is fine literary fiction. It’s funny and melancholic in turn, but always ambitious and original. Kelly is a multitalented writer. He’s equally at home with humor, pathos, and political commentary—sometimes in the same sentence. After the shooting, the “American public was shocked, dismayed, for a few days, deeply ashamed of itself.” This is not easy to do, folks.

Kelly makes good use of the history of assassination and attempted assassination in the United States, beginning with John F. Kennedy and working backward to Abraham Lincoln, with a sobering nod to Martin Luther King, Jr., Robert Kennedy, Gabrielle Giffords, et al., prompting reflection on our reliance on violence to solve disputes. “This is American history’s prescription,” Kelly writes, “if your wish is to irrevocably silence a man.” It is shocking to be reminded that four American presidents have been assassinated.

This engaging narrative is quick and steady, moving back and forth from the present to turning points in Monaghan’s past, switching third-person perspectives between Monaghan and Nora Meacham, “his best friend, his toughest critic, his walking, talking bullshit detector.” Friends since college, Meacham is also his campaign manager. Their friendship is complicated; they suspect they are soul mates, but a sexual relationship is out of the question.

Monaghan has conducted a lifelong struggle against gay clichés. There is so much more to him than his sexuality, and he doesn’t want to be defined by that single fact. “I want people to respect and understand me as a gay person,” he says, “but not define me as one. Is that too subtle a distinction to understand?” Kelly is outstanding at simultaneously depicting Monaghan’s outrage and emotional vulnerability.

Kelly evokes the sensitive, anxious child Monaghan who always knew he was gay, who became an adolescent terrified of exposure. At fourteen, he thinks he should “stop being afraid and start demanding justice.” Finally, at forty, he does. “The wheel turns slowly, but gloriously it turns.”