Review: JUNK GYPSY: DESIGNING A LIFE AT THE CROSSROADS OF WONDER & WANDER 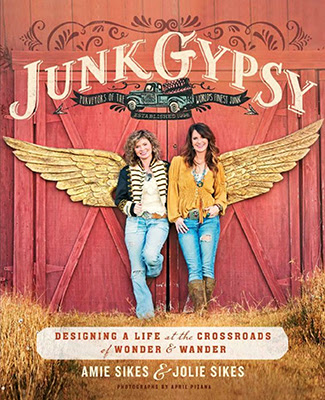 I reviewed Junk Gypsy: Designing a Life at the Crossroads of Wonder & Wander (Touchstone, an imprint of Simon & Schuster) by Amie Sikes and Jolie Sikes for Lone Star Literary Life.
Y'all, this is the antidote to corporate doldrums and beige.

Amie Sikes earned a journalism degree and a job in the state capitol—and had been accepted to law school—but she felt like a “messy-haired dreamer in a flat-ironed sea of networking.” Jolie Sikes earned a master’s degree and was working as an academic adviser at Texas A&M University. She requested two days off a month to help out at her parents’ restaurant. The answer was no — and Jolie quit. The sisters went home, where their mother Janie handed over two thousand dollars from her stash and suggested they go to the flea market, fix up some junk, and try to sell it. And thus began the “entrepreneurial rainbow-chasing and windmill-tilting”—the Junk Gypsy Company was born.

Junk Gypsy: Designing a Life at the Crossroads of Wonder & Wanderis the first book by the Sikes sisters, part memoir, part philosophy, part DIY. April Pizana’s photography is luscious, the perfect complement (“a thing that completes or brings to perfection”) to the Sikes’ text and creations.

Junk Gypsy is divided into three parts: The Road, The Flea Market, and Home; with chapter titles such as “Grit Happens” and “If Willie Nelson & Janis Joplin Had a Love Child…”. “The Road” is all about road-tripping treasure hunts and what the sisters call “dashboard therapy” (including a recommended music playlist). “The Flea Market” is a “sacred … place that lives and breathes,” constantly changing. There’s a section on Texas Antiques Week, the “mother lode junk Mecca,” which takes over Round Top, Texas, twice each year, temporarily swelling the population to more than 150,000. “Home” is a love letter to Round Top and includes a look at some of their home remodels and the sisters’ personal homes. Amie describes her place as “wayward mermaid who joined the circus on her way through cowgirl country.” Dad calls their style “funky schway.”

The Sikeses have provided practical tips, as well. There’s a field guide for flea markets, a list of must-have items for your toolbox, information on architectural salvage, and step-by-step instructions for DIY projects. These projects include distressing furniture (and jeans), ombré-style wall painting, and making curtains out of your favorite old T-shirts, just to name a few. The DIY projects include a difficulty rating: the more hammers, the more difficult the project.

Seventeen years later, the Sikes sisters’ “organic creation of an authentic brand” is an empire which includes the Gunk Gypsy World Headquarters (“a preserve for wild junk, a habitat in which every species of junk could coexist harmoniously and symbiotically”), a seven-thousand-square-foot store in Round Top, Texas, population ninety; a lodge in the “Gypsyville compound” called the Wander Inn; a popular HGTV show; a line of cowboy boots, Junk Gypsy paint, and décor for Pottery Barn Teen. Amie and Jolie are also famous for their Airstream trailer (“magic in a tin can”) rehabs for Miranda Lambert and Billie Joe Armstrong of Green Day fame, among others.