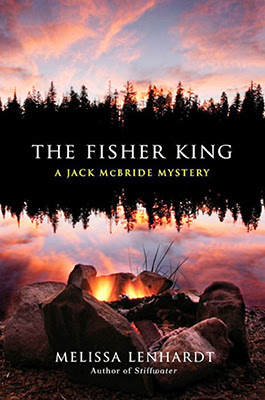 I reviewed The Fisher King: A Jack McBride Mystery (Skyhorse Publishing, Inc.) by Melissa Lenhardt for Lone Star Literary Life! This is the second installment in Lenhardt's Jack McBride mystery series. Her ability to conjure a complete small Texas town is uncanny.

Chief of Police Jack McBride has been on the job for just eight weeks, and the crime rate in Stillwater has apparently soared. The dead bodies are multiplying and high school kids are overdosing on dirty heroin. McBride’s job has become a political football in the city council campaign of powerful, lifelong Stillwater resident Joe Doyle (who looks “like a televangelist and was about as trustworthy”), owner of Doyle Industries, the town’s largest employer, who is also the local drug lord.

McBride has personal problems, too. His ne’er-do-well brother Eddie has taken a job with Doyle Industries; his estranged wife, Julie, has returned after a year of finding herself; and his budding love affair with Ellie Martin is on indefinite hold. As McBride gets ever closer to solving the crime wave, he discovers that he is a target.

The Fisher King: A Jack McBride Mystery is the second novel in Melissa Lenhardt’s series set in the small, fictional East Texas town of Stillwater. In Lenhardt’s first installment in the series, Stillwater, Jack McBride took down the corrupt former chief of police who had been in power for decades, controlling the population through fear, blackmail, and extortion, and by keeping their secrets in return for certain favors. It’s possible to read The Fisher King as a stand-alone, as Lenhardt does a great job of summarizing the goings-on in Stillwater.

The plot in this second installment in the series is simpler than it seems, with multiple subplots well woven in. The pace is quick and steady, accelerating toward the climax, as it should, with plenty of twisty elements to keep you guessing. Lenhardt’s cast is large, but each character is a sharply delineated individual, making the crowd easy to keep straight—except for the moles and double agents. Most of Lenhardt’s characters are believably genuine, excepting Julie McBride, a grown woman who looks “like the quintessential John Hughes movie villainess,” with the maturity of one of the Mean Girls.

One of the best things about The Fisher King is Lenhardt’s uncannily complete evocation of a fictional community. Stillwater rings true and has depth; I think I’ve been there. The small-town Texas personalities are here, as well as the not-so-secrets in a town where everybody knows your name. The conflicts and paradoxes of small towns are here, too. The need for economic revitalization versus an insular populace, suspicious of outsiders. The tendency to decades-old grudges. Historic preservation versus big-box stores.

The Fisher King is like a weekly television soap opera, a cross between Friday Night Lights and Dallas, with touches of Peyton Place for good measure. Lenhardt sets up the third installment expertly, including a new character. The Fisher King isn’t great literature, but it’s entertaining and engrossing fun—a great way to end the second season.

Posted by Texas Book Lover at 7:55 AM