Review: THE ROAD TO LLORONA PARK by Christopher Carmona 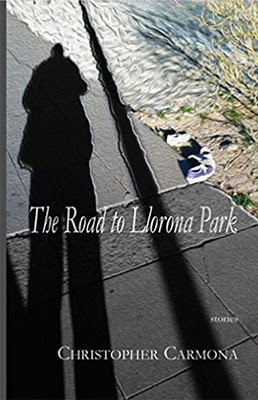 I reviewed The Road to Llorona Park (Stephen F. Austin State University Press) by Christopher Carmona for Lone Star Literary Life. This an uneven collection, but Carmona has vast potential. The stories improve as you continue reading—Carmona developing along with his characters.

“The universe is made of stories, not of atoms.” —Muriel Rukeyser

This is a collection of stories about stories.The characters are storytellers: journalists, poets, filmmakers, novelists, playwrights, speechwriters. Set on the Texas-Mexico border, primarily in the same county in the Rio Grande Valley, this series of linked stories features a common cast, following them over several years as the border changes, illuminating how these changes affect their lives.

The Road to Llorona Park: Stories is the new collection from chameleon and poet Christopher Carmona, a Pushcart Prize nominee and assistant professor at the Rio Grande Valley campus of the University of Texas. Carmona employs varying points of view—first and third, male and female, older and younger and in-between—to explore common themes of sexual betrayal in many forms, exploitation of both people and the land, and personal and political transformation, frequently spiked with the supernatural.

Standouts include the title story about Hal and Rowena, a “post-op tranny” who used to be named Rolly, who have been best friends since childhood. This road-trip tale is told empathetically and well—touching, funny, sad, confusing, and surprisingly sweet. “Strange Leaves” is the story of an underage, undocumented Guatemalan girl (who, as a young woman, will denounce the “pay-tree-archy” in her newfound English). Carmona creates a technique of broken English and a blend of straight text and iTelegrams to compelling effect. The title is a riff on “Strange Fruit.” There is blood at the root here, too.

The poet in Carmona serves up some striking images and creative turns of phrase. A woman awakes and “the remnants of her makeup were just abstract art” in the early morning. An aspiring novelist resents the cursor blinking on his computer screen, likening it to “that Dutch kid holding his finger in the hole, stopping anything from coming out.”

Less frequently, Carmona is funny, as when Rowena admonishes Hal, a writer, for handing out his home address. “There are a lot of Misery creeps out there,” she says. Unfortunately, Carmona is ill-served by negligent copyediting and proofreading, which is so poor as to be distracting. On the plus side, the artwork decorating the first page of each story is a nice addition to the text.

The Road to Llorona Park is an uneven collection, but Carmona has vast potential. The stories improve as you continue reading—Carmona developing along with his characters.