Review: NEWS OF THE WORLD by Paulette Jiles 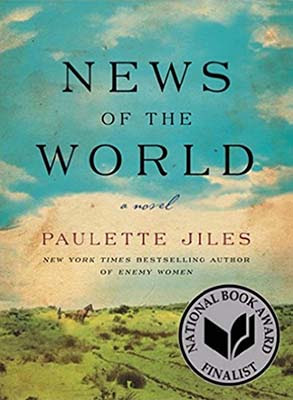 “All was in flux. Flux: a soldering aid that promotes the fusion of two surfaces, an unstable substance that catches fire.”

Melancholy, world-weary veteran of three wars Capt. Jefferson Kyle Kiddtravels Reconstruction-era Texas reading the news of the world to the information- and entertainment-starved populace for a dime a head. In Wichita Falls, Kidd is hired to return ten-year-old Johanna Leonberger, captured by the Kiowa four years earlier in a raid which killed her parents and sister, to her aunt and uncle in Castroville, a perilous three-week journey of four hundred miles through sparsely populated wilderness, in the anarchy of post–Civil War Texas, and the ever-present threat of Comanche and Kiowa attack.

Johanna (“something alien whose taxonomy is utterly unknown and probably dangerous”) speaks no English and doesn’t remember anything of her former life. Between escape attempts, she refuses to wear shoes, insists on sleeping on the floor, and is utterly bewildered as to why she should eat with a fork. Kidd and Johanna encounter multiple hardships on their odyssey, but perhaps the most challenging is what happens at the end of the line. How can Kidd turn her over after Johanna becomes his brave, ingenious “little warrior”? “But now it was different . . . there was once again a life in his hands. Things mattered. The strange depression and spiritual chill he had felt back in Wichita Falls was gone.”

Paulette Jiles’s 2016 National Book Award–nominated News of the World is historical fiction with unexpected parallels to the present. Political turmoil, a “world weighted with railroads and modernity coming up against ancient tribal hatreds,” in the forms of war, greed, racism, and xenophobia have made Texas, and the world, a more frightening place, then and now.

Jiles doesn’t use ten-dollar words, but oh my, the impactful combinations of simple language. Foreshadowing: “there were other, more covert faces, looks of interest and greed”; imagery: “a shy and obsequious road that dodged every bank and lift and wound through the pecan trees and never insisted on its own way.” Pathos exists in Kidd’s grocery list: “feed, flour, ammunition, soap, beef, candles, faith, hope, charity.” Just plain beauty: “Above and behind them the Dipper turned on its great handle as if to pour night itself out onto the dreaming continent.”

In the midst of tragedy and near-misses, News of the World is generously leavened with humor. “[Kidd] could hear her begin a Kiowa chant. This could mean anything. It could mean she was resigned, it could mean she was going to hang herself with the curtain cording, or set the place on fire, or go to sleep.”

News of the World is complete: heartbreaking sorrow, heart-stopping suspense, dulcet sweetness, elegiac ease, courageous spirit, rich characterization, satisfying in its poetic justice, and a setting that exceeds mere background. The plot is deceptively simple, the pace quick and steady. Of all of these elements, the reason to read News of the World is for the joy of watching the relationship develop between a world-weary seventy-one-year-old widower whose dreams are “a place fragmented and without illumination” and a young child of “kinetic stillness.” This novel will shred your heart, patch it back together, and make you enjoy it.