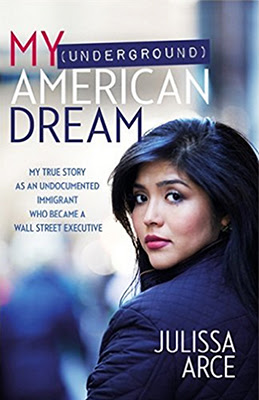 I reviewed My (Underground) American Dream: My True Story as an Undocumented Immigrant Who Became a Wall Street Executive (Center Street, a division of Hachette Book Group, Inc.) by Julissa Arce for Lone Star Literary Life. This is an entertaining, maddening, inspiring memoir of an American life.

In 2005, twenty-two-year-old Julissa Arce rushed to a hospital emergency room in Lower Manhattan with the symptoms of a heart attack: severe pain in her chest, unable to catch her breath, tingling in her left arm. The episode was diagnosed as an anxiety attack. Two weeks thence she was due to begin her dream job as a financial analyst at Goldman Sachs, a goal she had worked toward since high school. At a time when Arce should have been on top of the world, she was a physical wreck. An undocumented immigrant, living in the United States since she was eleven when her parents brought her to join them, Arce was petrified her secret was about to be exposed.

Arce’s early childhood was almost idyllic. “I was not the poor barefoot Mexican girl who sold gum on the side of the road,” she writes. Arce went to an all-girls’ Catholic school, was cared for by a nanny, and took piano, ballet, art, and karate lessons.

Though she was surrounded by her sisters, grandmother, and extended family, there were two things missing in her life: her parents. Her mother and father lived legally in San Antonio, Texas, running a successful silver jewelry business. The other children in her school called her an orphan.

When Arce finally joins her parents, life is not at all what she expected.

My (Underground) American Dream: My True Story as an Undocumented Immigrant Who Became a Wall Street Executive is Julissa Arce’s memoir of a life on the down-low—two separate lives—what she terms “the golden cage.”

Arce’s writing conjures her personality at every stage: a sassy, spoiled schoolgirl; a lonely, confused, angry adolescent living in the shadows; and finally an ambitious, confident businesswoman. Her descriptions of growing up the daughter of hard-working entrepreneurs, rebelling against the restrictions of her parents and her legal situation, the intoxication of a prestigious Wall Street position, and ultimately her political awakening, are wholly sympathetic. Most powerfully moving is how she learned she was undocumented and the adolescent heartbreak of the loss of a quinceañera, a cultural touchstone.

I was no longer just a “Mexican,” which seemed to be bad enough in certain people’s eyes. I was an “illegal,” or worse, an “illegal alien”—like some thing from another planet that wasn’t even human. I couldn’t reconcile what I saw on the news with what I saw in the mirror.

At times My (Underground) American Dream reads like the corporate-speak of an earnest motivational business manual, losing the engaging, intimate tone. Arce writes of “leveraging” job offers. She is a Dale Carnegie alum and repeats such axioms as “Dress for the job you want, not the job you have.” Other times Arce is very funny, such as when her baby brother is born. “Not only was he a boy … born on Christmas Day … in America … not only had I been kicked off the donkey,” she writes, “I’d been kicked off the donkey by a miracle baby. My love of Christmas suffered a terrible blow.”

My (Underground) American Dream is an entertaining, maddening, and inspiring story of an American life.