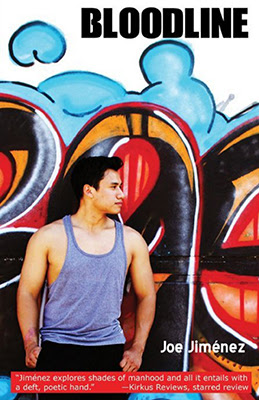 I reviewed Bloodline (Piñata Books an imprint of Arte Público Press) by Joe Jiménez for Lone Star Literary Life. This is YA fiction for lovers of language.

Tell me, what is it you plan to do with your one wild and precious life? —Mary Oliver

Abram is seventeen, living with his grandmother in San Antonio. His father died when he was three years old — no one will tell him how or why — and his devastated and overwhelmed mother left soon after. Abram has had four fights and two suspensions this school year, and it’s not yet Thanksgiving. His grandmother is distraught; she worries that Abram needs a man to model male adulthood for him, that her example, love, and care cannot suffice. She lost Abram’s father; she will not lose him, too. Enter Tío Claudio, bombastic, volatile, manipulative, and avaricious.

Bloodline is the debut novel from Joe Jiménez. This slim volume of young adult fiction is rich in emotion and language, diving deep into the perilous psychological territory of violence, harboring a final plot twist that caused me to fall silent and still.

The plot of Bloodline is simple, the pace steady. Jiménez employs a second-person point of view for Abram’s narrative, for reasons that aren’t clear until near the end of the story. It’s a difficult narrative mode, but elegant and haunting in this writer’s hand. The characters are relatable and complex — notably Abram and his girlfriend, the smart, red-headed Ophelia — and allowed a good deal of further development. Jiménez portrays the essence of Abram’s grandmother through her physicality, her “voice like a hand smoothing out a bedsheet.” We can gauge the atmosphere in the house by the grandmother’s hands.